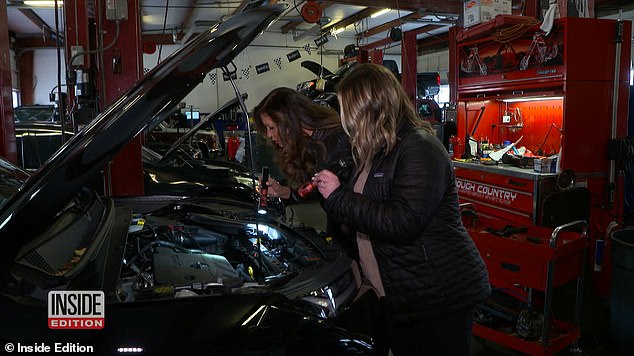 Women throughout the country are coming forward with horror stories of finding Apple AirTag tracking devices hidden in their cars, bags, coats and other items.

The $30 wireless devices were designed to help keep track of items people often misplace, like keys or wallets, but have increasingly been revealed to be used by suspected stalkers to track women.

A young mother in Texas said she found an AirTag taped inside her duffel bag as she traveled from Texas to Maine.

‘I think they definitely would have hurt me. I don’t think you do that for no reason,’ she told Inside Edition.  ‘It took almost 14 hours to let me know this was happening,’ she said.

The device is designed to prohibit ‘unwarranted tracking’ by alerting a nearby iPhone when the AirTag has been separated from its user. For example, if someone was to place an AirTag on a car but not get in the car, then the driver of the vehicle should be alerted that there is an AirTag nearby or moving with them. 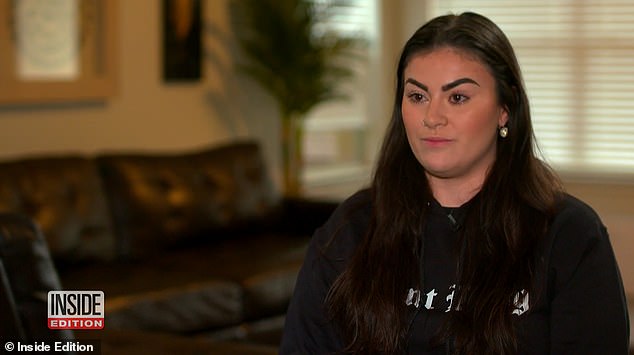 ‘I think they definitely would have hurt me. I don’t think you do that for no reason,’ a mother in Texas said after finding the device in her duffel bag after 14 hours 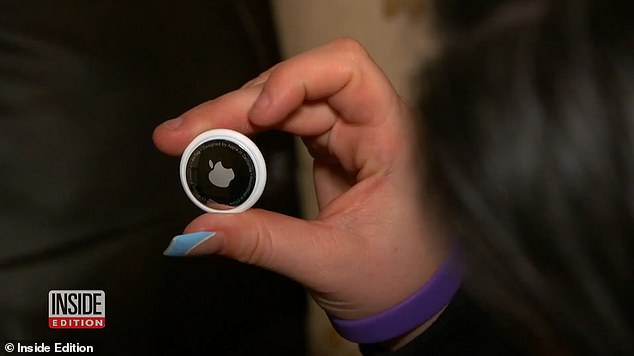 The AirTag should begin to play a sound to let people nearby know its location. However, it has been proven that the alert and sound can take hours or even days to be sent out and are even able to be turned off. The devices are also very small and can easily be hidden.

The location of the AirTag is sent to iCloud where it can be seen on a map, according to Apple’s website. Using the ‘Find My’ app, the system provides its owner with step-by-step directions to locate the tag and the missing product.

Apple has released an Android friendly app called tracker detect to allow Android users to be alerted of an AirTag moving with them.

‘These are an industry-first, strong set of proactive deterrents,’ Kaiann Drance, Apple vice president of iPhone marketing, said in an interview with the Washington Post. ‘It’s a smart and tunable system, and we can continue improving the logic and timing so that we can improve the set of deterrents.’ 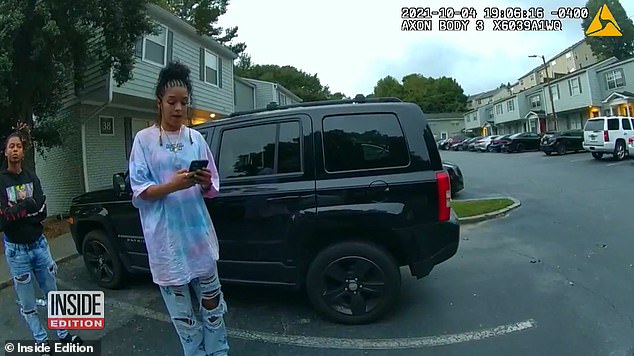 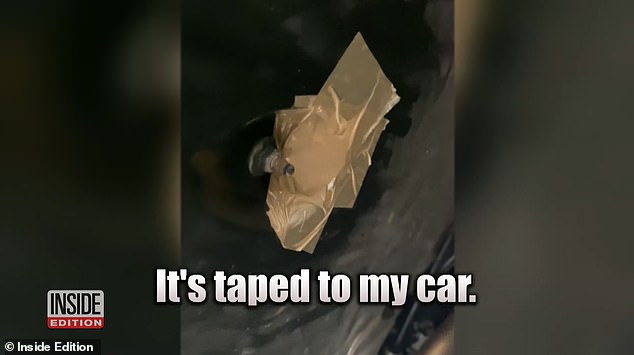 In several states, it is not illegal to place a tracking device on another persons vehicle 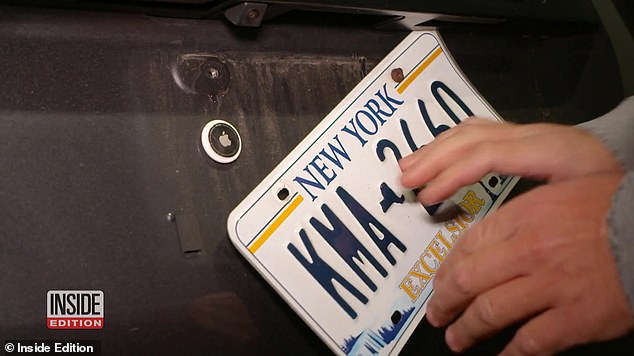 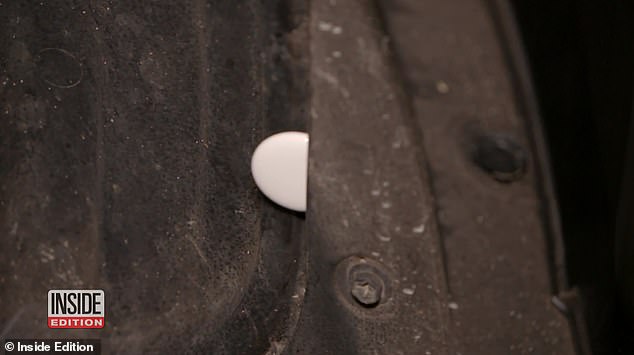 A woman in Atlanta contacted police after she was notified that she was being tracked by an AirTag.

‘I randomly got a notification to my phone saying something about how there is an AirTag that doesn’t belong to me that’s been with me,’ the woman explained to police.

Bodycam footage recorded the scene as police helped the woman search her car and eventually found an AirTag in her gas tank. Even police officers are struggling with how to handle the scary situations.

‘This is my first instance of running into something like this, so I honestly don’t even know how to go about trying to identify,’ the officer said to the woman.

Another woman in Atlanta was notified that an AirTag was moving with her car she drove from the mall to her house, but has been unable to find the device.

‘It scares me to death. I really feel helpless,’ she told Inside Edition who took her to an auto shop to have a team of mechanics search the vehicle. But even they failed to find the tracking device.

Alarmingly, in Georgia and several other states it is not illegal to place a tracking device on another persons car.

University of Southern Indiana student Sarah Jones found that she was being tracked using an AirTag on Thursday. She never found the device but was made aware that it had already tracked her for several days and been to her house.

‘I haven’t found it, so if the person did remove it, they already found out where my home is,’ Jones told News 14. ‘They already know where I live, they know the cars there. What’s scary is someone could track you and then six months from then, a year from then, two years from then, then try to do something.’

‘I try to take daily precautions to not do things that are going to put me in these positions, so it just really frustrates me that no matter what you do, even if you’re in public or at a school, someone would feel the need to do that,’ she said.

On Friday, a person in Pennsylvania notified police after they received alerts that an AirTag had tracked them from a movie tavern to their home.

‘Safety Alert, Your Current Location Can Be Seen By The Owner Of This Item. You May Be Carrying This Item, Or It Could Be Located Closely. If This Item Is Not Familiar To You, You Can Disable It And Stop Sharing Your Location,’ a second notification said with a map showing their route from the theater to their house.

The person then spotted an unknown vehicle sitting outside the home and approached the vehicle. As it slowly drove away, third notification informed the person that the device was moving again and then disconnected.

Two women in Chicago, two women in Southern California and a woman in Florida have all made headlines this week for reporting being tracked by AirTags.

It comes as Sports Illustrated Swimsuit model Brooks Nader, 26, made national headlines when she revealed a stranger put an AirTag in her coat at a bar and tracked her home. 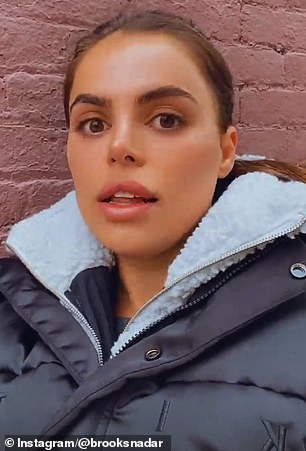 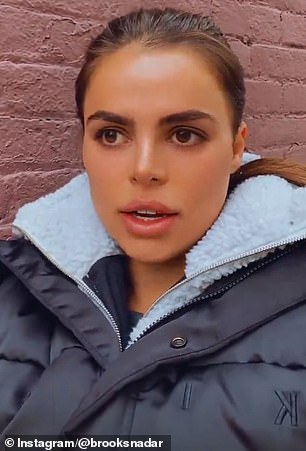 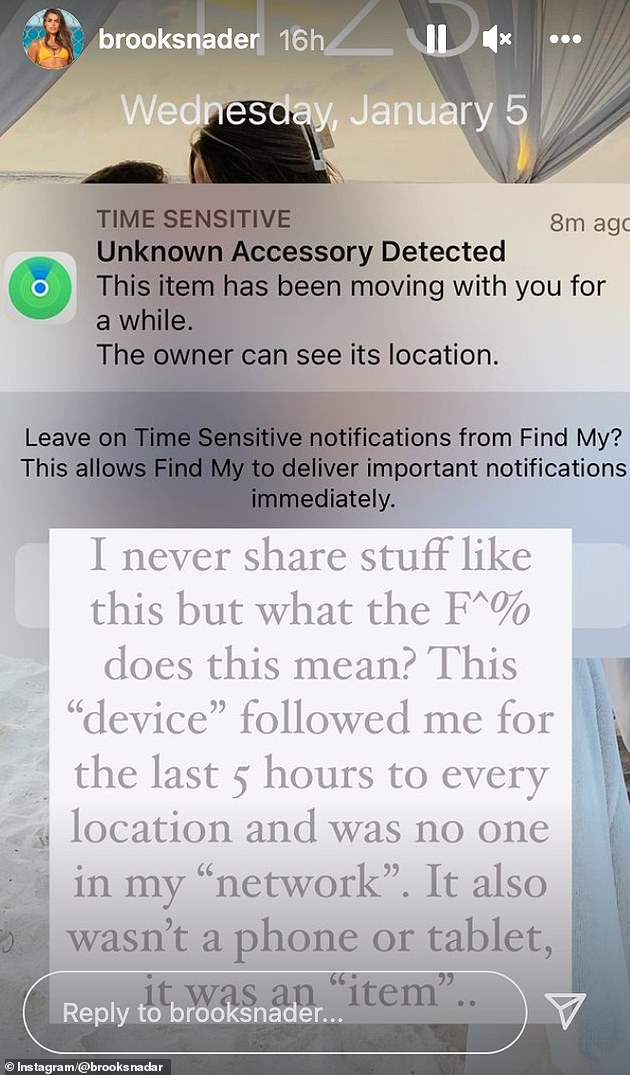 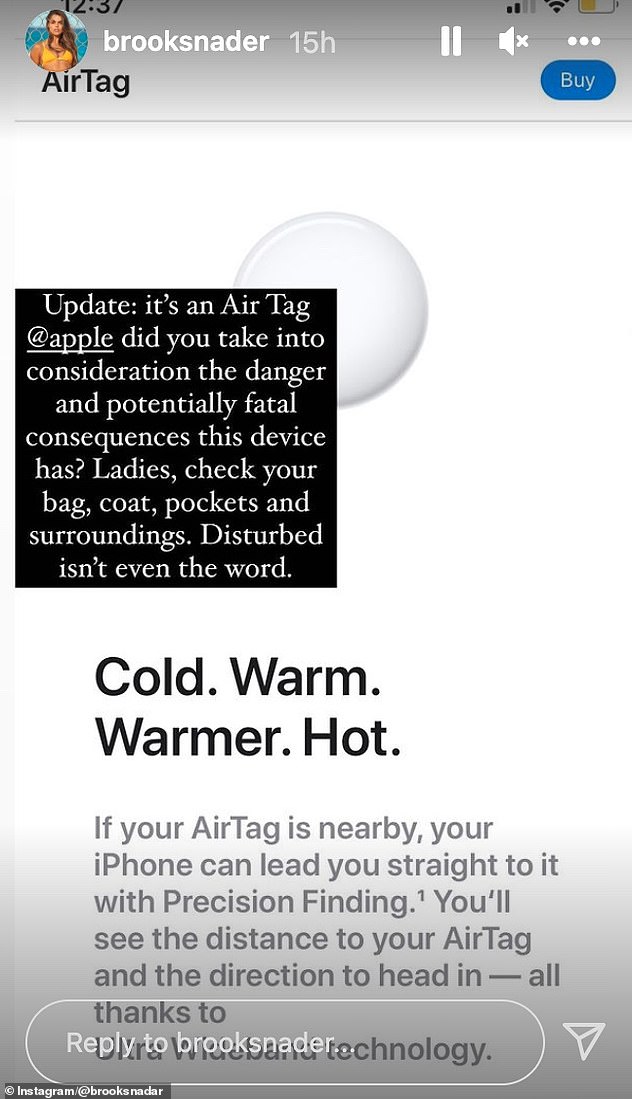 She later discovered that it was an Apple AirTag – a device designed to help keep track of items you often misplace, like your keys or your wallet 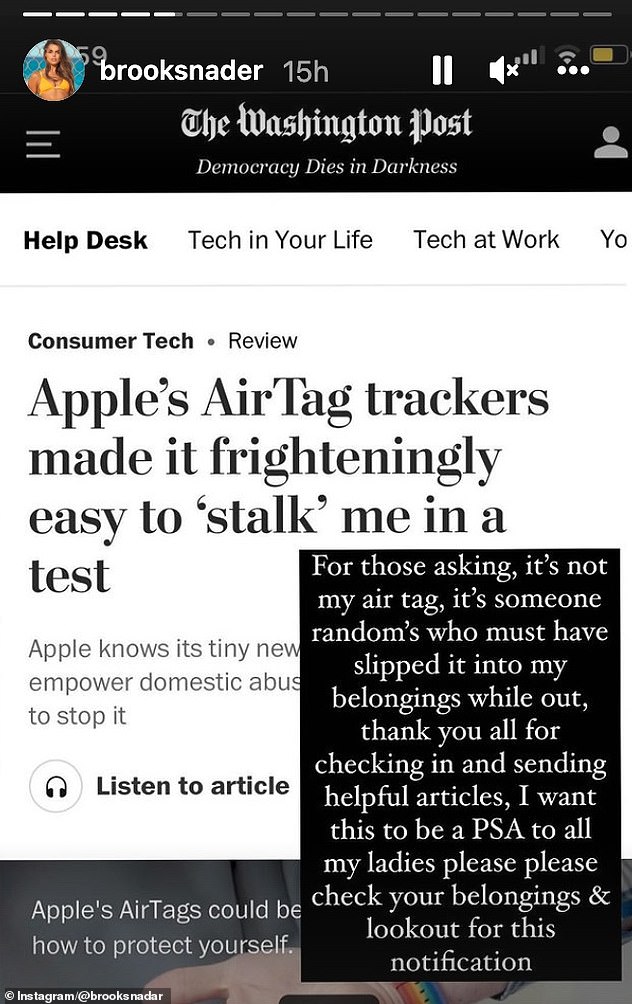 However, Brooks warned others about the dangers of the item, pointing out that anyone could put one into your pocket or purse and use it to track your movements 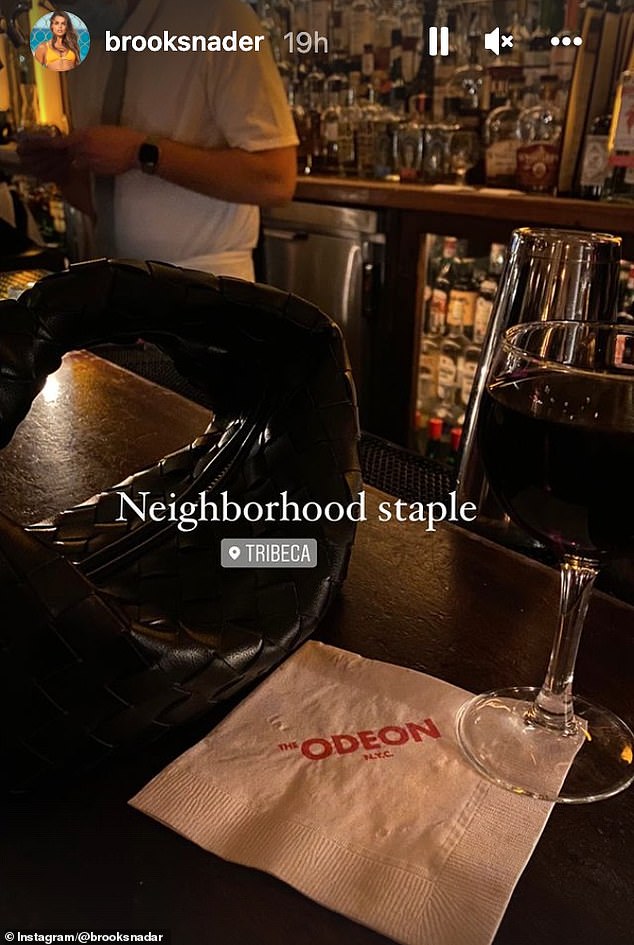 The scary incident happened while she was out at the Odeon bar in TriBeca, New York City

To her horror, the fashion star didn’t realize that the AirTag had been concealed in coat until hours later — after she received a notification on her phone that told her an unknown item had been ‘moving with her for a while’ and that ‘the owner could see its location.’

‘I never share stuff like this but what the F does this mean?’ she wrote on Instagram, alongside a snapshot of the Apple notification she received on her phone.

‘This ‘device’ followed me for the last five hours to every location and was no one in my ‘network.’ It also wasn’t a phone or tablet, it was an ‘item.” She later discovered that it was an AirTag.

Brooks warned others about the dangers of the item, pointing out that anyone could slip one into your pocket or purse and use it to track your movements.

She added in a second post, ‘@Apple, did you take into consideration the danger and potentially fatal consequences this device has? Ladies, check your bag, coat, pockets, and surroundings. Disturbed isn’t even the word.’

The model also chatted with DailyMail.com exclusively about the horrifying incident.

‘I went to bathroom left my coat on the chair and that’s when I think someone slipped it in. They then followed me for five hours all the way home.’

Brooks explained that she had ‘never though anything like this could happen to her,’ and said she wanted to share her story in the hopes of educating other women.

She added, ‘I hope that my story can help raise awareness and encourage ladies to look out for this notification and keep their belongings close, especially when out and about.

‘I never thought anything like this could happen to me and it did. If this does happen to you and you find an AirTag, immediately call the police and Apple to track the serial number back to the perpetrator. As women, we need to stick together and warn each other of situations like these.’

‘Another side note for my ladies, I learned my lesson the hard way,’ she said. ‘If you’re going to post at a restaurant, drinking with your girlfriends, working out, whatever you’re doing — if it has a location that’s obvious or geotagged, wait until you leave to post it.

‘I have made that mistake so many times and it’s very easily avoidable. Just wait until you’re home or you’re walking home or whatever until you post that.’

Hundreds of women have posted videos on TikTok to share their stories of how they found mysterious AirTags attached to their items and tracking their location since the tracking device was released by Apple in April.

TikTok user Kayla Malec revealed in a viral video how she discovered an AirTag on the bumper of her car after receiving a notification that an AirTag was ‘moving with her’.

The woman filmed herself checking behind her license plate and other likely hiding spots around her car, including her vent and between the windows and cracks, in order to find the tracker. 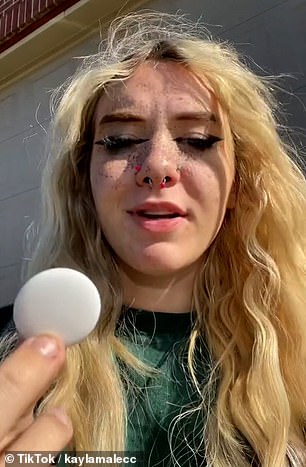 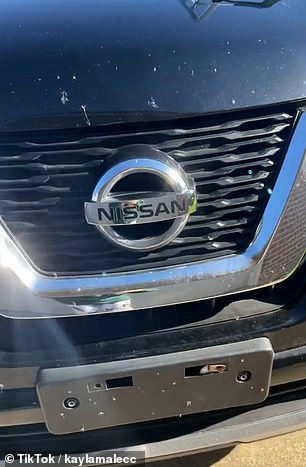 Women have been revealing online how strangers are placing AirTags on their vehicles in order to track their every move (Pictured: Kayla Malec, an artist, filmed herself searching her car for an AirTag after receiving a notification that the tracker was ‘moving’ with her)

After a first sweep, she was unable to locate the tracker on the outside of her car.

She then moved on to searching inside the car, from her glove box to between and underneath the seats, but did not find anything.

Eventually, at the end of the video, Kayla said she found the tracker, and felt ‘sick.’

‘I think I want to cry more now that I found it. My heart feels like it’s going to come out of my throat. Somebody, while I was parked somewhere, came up to my car and slid it in,’ she claimed.

‘And I would have never seen it, but a little bit of the white was poking through,’ she went on.

In spite of finding the device, Kayla was unsure what to do, and whether she needed to contact her local police enforcement.

‘I don’t really know what to do now that I’ve found it, I don’t know who to get in contact with, like do I go to the police? What are they gonna do,’ she questioned.

Meanwhile, a Texas-based TikTok user going by Angel said she had received similar notifications. She said that she de-activated her Bluetooth and her location, but it didn’t stop the owner of the tracking device from following her. 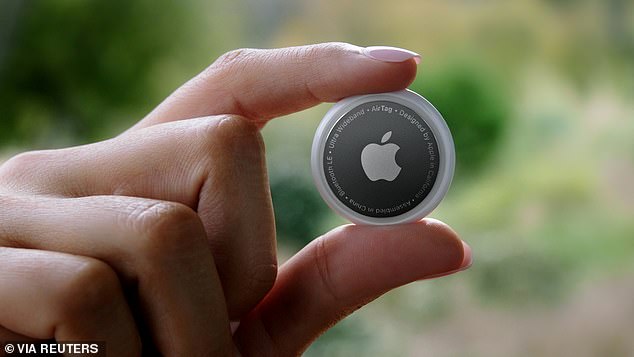 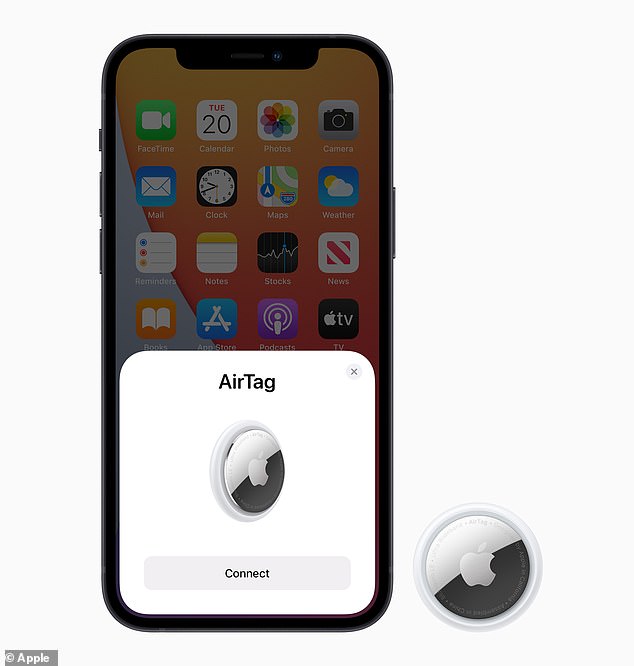 ‘After I posted a little bit about this on my Instagram story, I had a friend call me and he told me that his little sister got the exact same notifications, come into her phone a couple of weeks ago and she ended up finding an Apple AirTag under her license plate,’ Angel said.

Angel added she contacted law enforcement about the case, and was awaiting more information from them.

Each AirTag has a serial number physically written on it and connected by Bluetooth. If law-enforcement produces a court order, Apple could reveal the identity of the iPhone the AirTag is registered to.

Law enforcement officers are advising women to go to the police department immediately after getting an unwarranted AirTag notification or finding the device. If possible they advise to avoid returning home, however most women seem to learn about the tracking devices after going home.