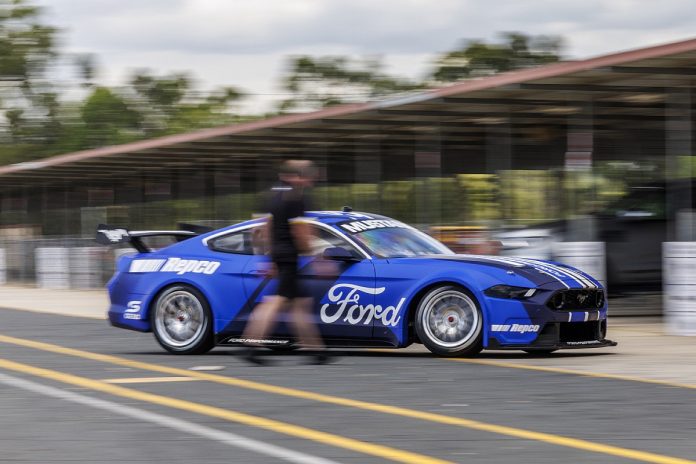 Two-time series champion Ambrose will drive the Ford Mustang at the Symmons Plains circuit during the Tasmania SuperSprint weekend, while Tander will be in the Triple Eight-built Camaro.

The pair will be doing passenger rides in the car on the Friday, a first for the Gen3 prototypes, before more demonstration laps across the Saturday and Sunday.

It will mark the first time each driver has sampled Gen3 hardware, although Tander was set to drive the Camaro at Winton last month, before that test was canceled so the prototypes could undergo changes to the chassis and gear shift system.

“I can’t wait, to be able to get behind the wheel of one of these cars that I’ve heard so much about already,” said Tander. “And to be one of the first to drive it at Symmons Plains, which is such a high-speed circuit, will be a great privilege.”

For NASCAR race winner Ambrose, the opportunity to drive the Gen3 Mustang at his home circuit will be a special one.

“I’m excited to be one of the first to drive one of these Gen3 Supercars at home at Symmons Plains,” Ambrose said.

“I’ve driven this track many times in many cars, but to be able to do it in a Gen3 car will be interesting.

“I have heard a lot about the Gen3 and I’m looking forward to driving it and see what the car feels like from behind the wheel.”

As revealed by Motorsport.com last week, the Symmons Plains demo is part of revised testing plan for the Gen3 prototypes.

The testing program was paused last month so the cars could undergo changes based on feedback from drivers.

That was largely centered on ergonomics, driver comfort emerging as a serious issue following a handful of tests at Queensland Raceway.

At the same time the Auto Gear Shift and paddle shift systems have been ditched in favor of a mechanical shift system, which will make its first appearance in the Gen3 cars in Tasmania.

Following the Symmons Plains demo, it’s expected that the cars will take part in a proper test at Phillip Island the week following the Australian Grand Prix.

Supercars, meanwhile, has also confirmed that Ambrose will form part of the commentary line-up for the Tasmania SuperSprint.

He made his TV debut for the series at the same event last year and returned to the broadcast several times during the 2021 season.

“I’ll be sharing my thoughts on it during the broadcast, which I’m very happy to be returning to over the race weekend,” said Ambrose.

“From what we saw in Sydney a few weeks ago, this year’s championship could shake up the order, so I’m really looking forward to what’s to come on track.”

The Tasmania SuperSprint will take place on March 25-27.