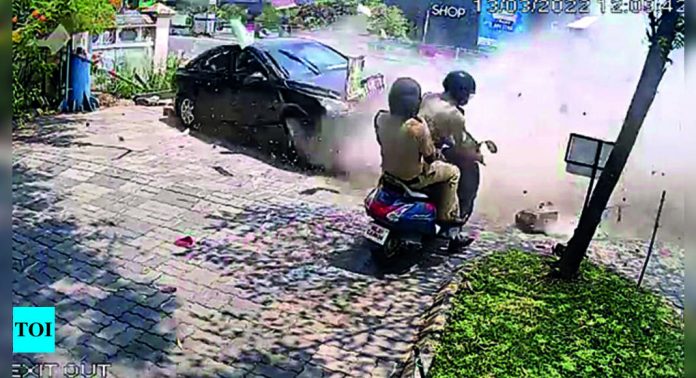 Kochi: Two police officers had a narrow escape after a speeding car went out of control and rammed into parked vehicles and a boundary wall next to where the officers were standing on Sunday. Those in the car also escaped with minor injuries.
The CCTV footage of the policemen slowly moving towards the road in their scooter before the car swerves past them has been widely shared on social media. The incident occurred around 12 noon near Infopark.
The policemen, SCPO Selvaraj VN and CPO Vinu KP, had gone to the spot as part of an investigation in another case. They were about to leave the spot when the car came out of nowhere and rammed into a bunch of vehicles, went across their scooter and hit a boundary wall by the road.
Selvaraj sustained minor injuries to his leg in the collision. Vinu said that everything happened very quickly.
“We heard the sound of someone applying a sudden brake. Then the car came out of nowhere and went right past us. The entire area got covered in dust as the car tried to stop. We realized what had happened only after a couple of seconds. Soon, we rushed to the car to check on the youths who were in it. They were rushed to a hospital,” said Vinu.
Infopark police said that prima facie speeding caused the accident.
“The vehicle seems to have hit a median and went out of control. It rotated and hit a couple of scooters. The impact was so strong that the scooters got tossed away,” said Infopark police.
Infopark police said that the youths were under observation at a hospital.
“A person named Vivek (22) was behind the wheels. He has not sustained major injuries. There were two others in the car. One among them seems to have minor internal bleeding. They are under observation,” said police.
Infopark police have launched an investigation to find what exactly happened, police said.