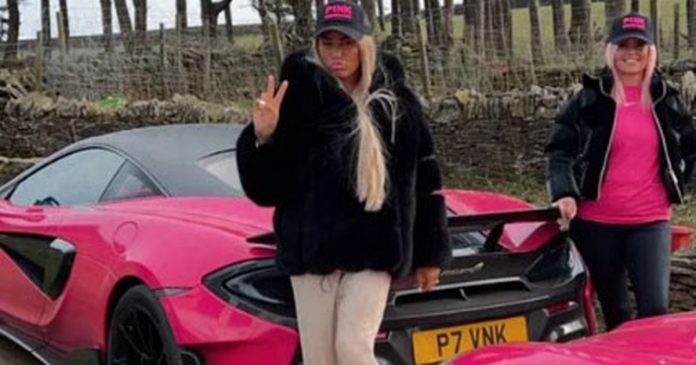 Former glamor model Katie Price posed up alongside a hot pink Ferrari, telling fans she was having a car designed for her, despite a judge recently telling her she had the worst driving record they’d ever seen

Katie Price has declared that she’s having her very own supercar specially designed for her, despite a judge recently saying she has the worst driving record they’ve ever seen.

The mum-of-five took to Instagram to share a snap of herself posed up alongside a hot pink Ferrari and Lisa Marie Brown, a businesswoman whose company Pinkspiration has grown into a global social brand.

“Good day filming with @lisamariebrown123 and she is designing my new car wooo watch the space,” Katie shared on her Instagram story.

She also shared a video of them standing alongside each other, wearing matching ‘P1NK’ logo hats, with the former glamor model excitedly declaring that people would have to stay tuned to find out what kind of car she’s getting.

Katie says she’s having a supercar designed for her

Lisa Marie also proudly shared the same video and a snap of Katie on her Instagram account, which has more than 42,000 followers.

Last December, Katie narrowly avoided jail after admitting to a 5am drink-drive car crash while she was banned from driving.

It was the sixth driving conviction for the 43-year-old in the last ten years.

Katie pleaded guilty after being charged with driving while unfit to drive through drink, using a motor vehicle on a public place without third party insurance and driving while disqualified.

Announcing her sentence, District Judge Amanda Kelly said: “When you chose to get behind the wheel that night you showed no concern for others.

“You could have killed somebody. Your actions meant the emergency services had to use up their precious time. You knowingly and deliberately flouted a court order and not for the first time.

“You seem to think you are above the law.”

Katie will also have to complete 100 hours of unpaid work in the community.

Her two-year driving ban was kept in place, but Katie is already making preparations for when she can get back on the road.

Katie heading to court for her sentencing in December
(

Judge Kelly told Katie her driving record was “the worst” she had ever seen, but explained why she was unable to send her to jail despite feeling it would have been just.

The judge told Katie that she was unable to send her to prison because of a previous decision at her plea hearing.

At that hearing, a magistrate agreed to defer Katie’s sentencing on the understanding that she attended rehab facility The Priory for treatment and didn’t commit any further offenses.

And because those criteria were met, the judge explained she couldn’t send her to jail.

She said Katie was “extremely lucky” that the magistrate chose to defer her sentence.

District Judge Kelly told Katie she was lucky that she wasn’t going to prison, but that her hands were tied on the matter.