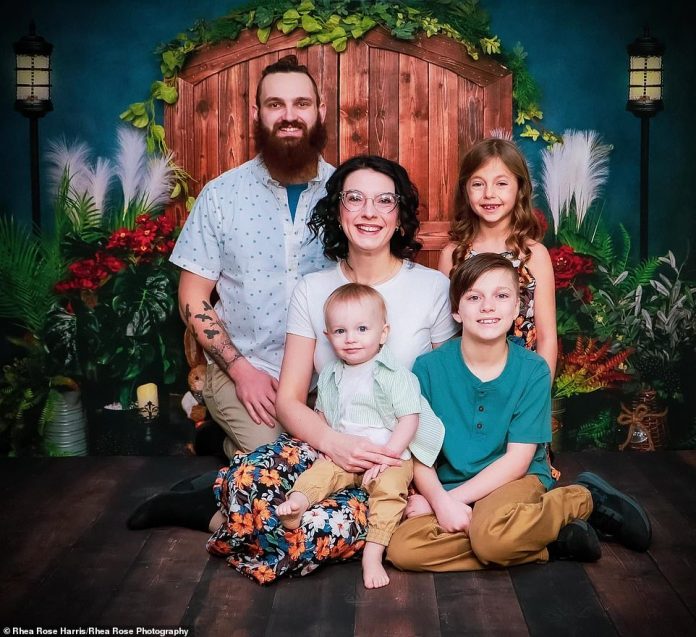 Haunting photos show a family-of-five just hours before a fatal crash on an Ohio highway claimed their lives.

Less than ten hours later, the family was involved in a high-speed collision, on County Road 14 in Clinton Township, that police say occurred after another driver failed to yield to a stop sign.

All five died as a result of the crash, which cops say occurred late Saturday night.

The shots, snapped Saturday, show Ohio man Xavier Brown, 25, and fiancée Muriel Michael, 28, posing with their family less than 10 hours before a crash claimed their lives 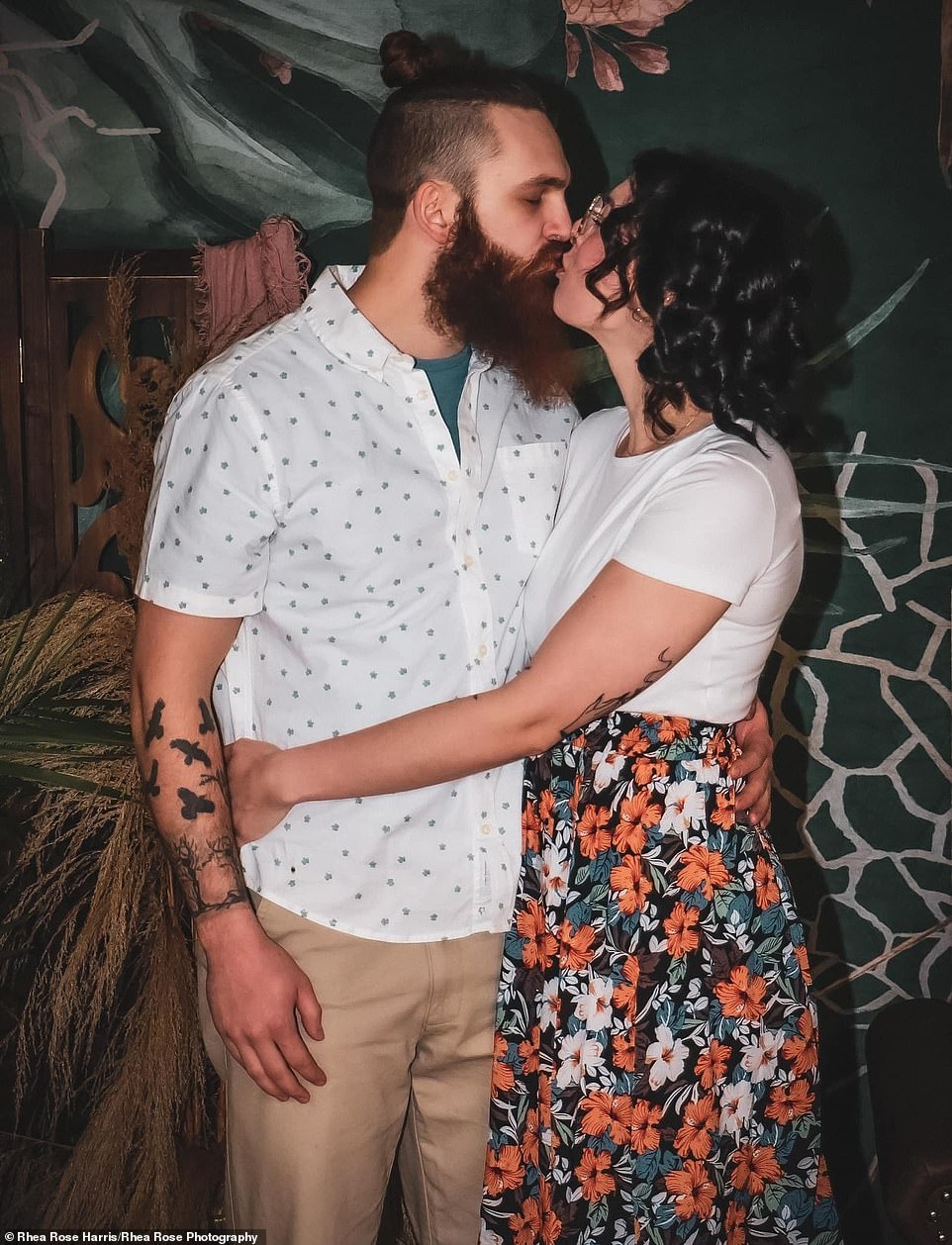 The couple, who both hailed from Ohio, were set to wed later this year, photographer Rhea Harris said Sunday after learning of the tragedy. The shoot was the first of many planned by the couple

Headed southbound on the rural roadway at around 11:48pm, the family’s vehicle was struck by a car driven by 21-year-old Zane Hullpolice said Sunday.

Hull, who only suffered minor injuries in the crash, was headed eastbound on intersecting road County Road H, police said, when the collision occurred. Cops said he failed to yield to a stop sign, causing the crash.

Brown and his son Deklin both died at the scene, responding officers said after being called to the scene of the crash early Sunday morning. Aurora, a girl, and Riggs, a one-year-old boy, both died after being airlifted to a nearby hospital, lawmen further revealed.

Michael, meanwhile, who was set to marry Brown later this year, survived the initial impact and was also rushed to the hospital.

Tuesday morning, the Ohio State Highway Patrol announced that she, too, had succumbed to her injuries late Monday night. The incident remains under investigation.

According to Harris, who specializes in family, newborn, and pinup-style photo shoots, Saturday’s photo op was the first of many planned by the couple ahead of their upcoming wedding. 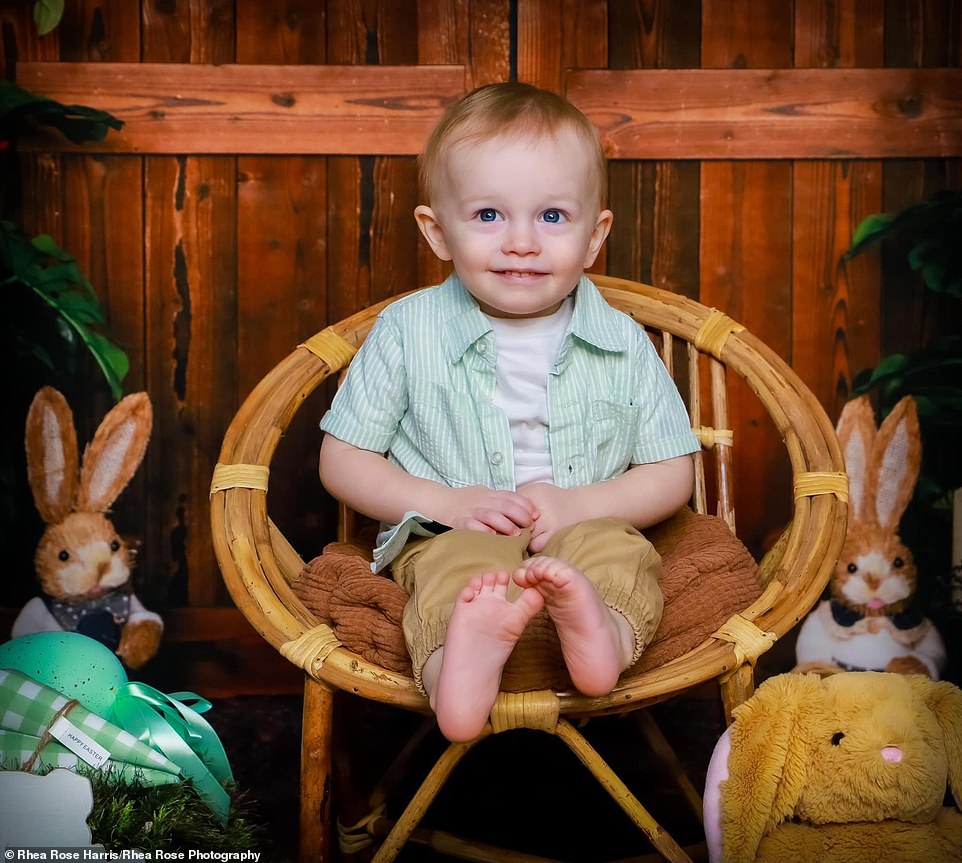 Infant Riggs, 1, was airlifted from the wreckage early Sunday following the crash and rushed to a hospital, where he died later that day. ‘He was so happy,’ photographer Rhea Harris said of the tot, whom his father said ‘well-behaved.’ She recalled: ‘He smiled on cue and even said “cheese” a few times!’ 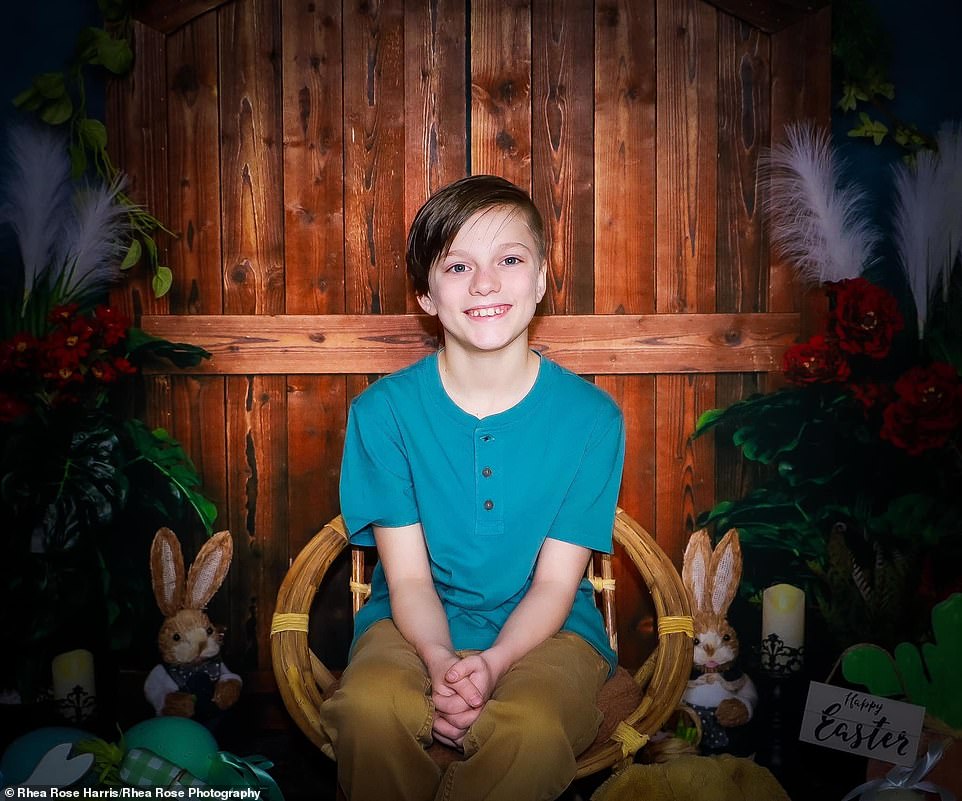 Eldest Deklin, 9, along with his dad, died at the scene police said Sunday. Photographer Harris recalled the youth as ‘adorable,’ describing the youngster as a ‘clear helper and protector’ 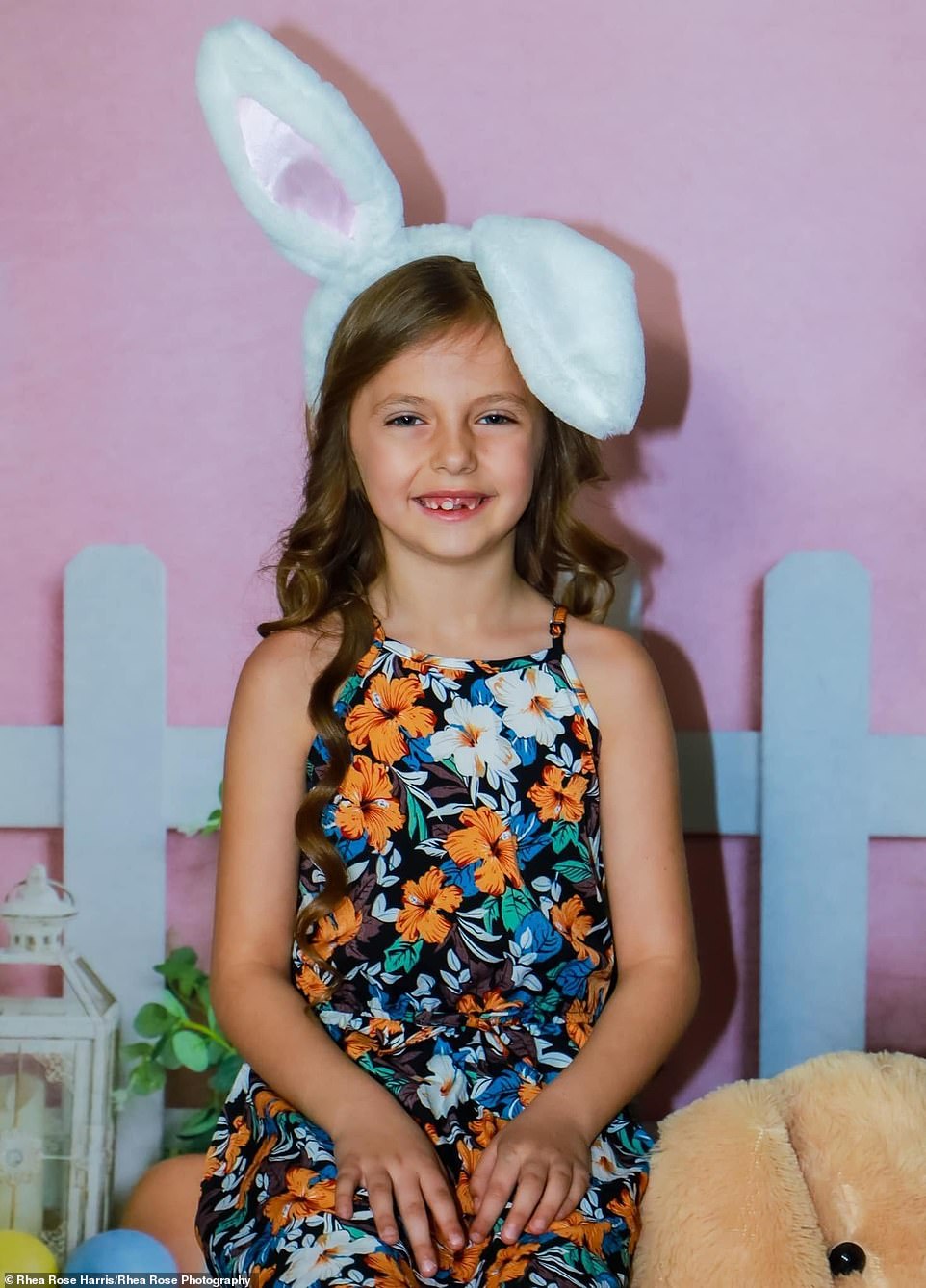 Middle child Aurora, 7, who was seated in the backseat with her two siblings, also survived the initial crash, but died after arriving at a nearby hospital. Harris, recalling the child’s toothy grin, called her a ‘delight’ to deal with during the Easter-themed shoot. ‘With missing teeth and her happy smile, it wasn’t hard to be drawn to her,’ she said of the youngster

‘I always notice special things about each and every client or family that comes to work with me,’ Harris told ABC affiliate KTNV 13 Action News after learning of the tragedy Sunday morning.

‘A lot of the time, they leave a lasting impression on me,’ the professional snapper added, telling the Ohio news station that his brief interaction with the family Saturday afternoon was no different.

‘I had such a fun time photographing this family,’ said Harris. ‘Muriel and Xavier were clearly in love, their happiness definitely came shining through in their photos.’

‘She was so excited for their wedding and their future together as a family,’ the photog said. ‘I was just as excited to be a part of it with them. I never could’ve imagined what would come next.’

Police said Sunday that Michael had been driving the vehicle prior to the crash, with her to-be husband in the car’s passenger seat. The three children were seated in the back.

‘He was so happy,’ Harris recalled of the one-year-old, whom she said his father said was ‘well-behaved.’

‘He smiled on cue and even said “cheese” a few times!’ she told KTNV. 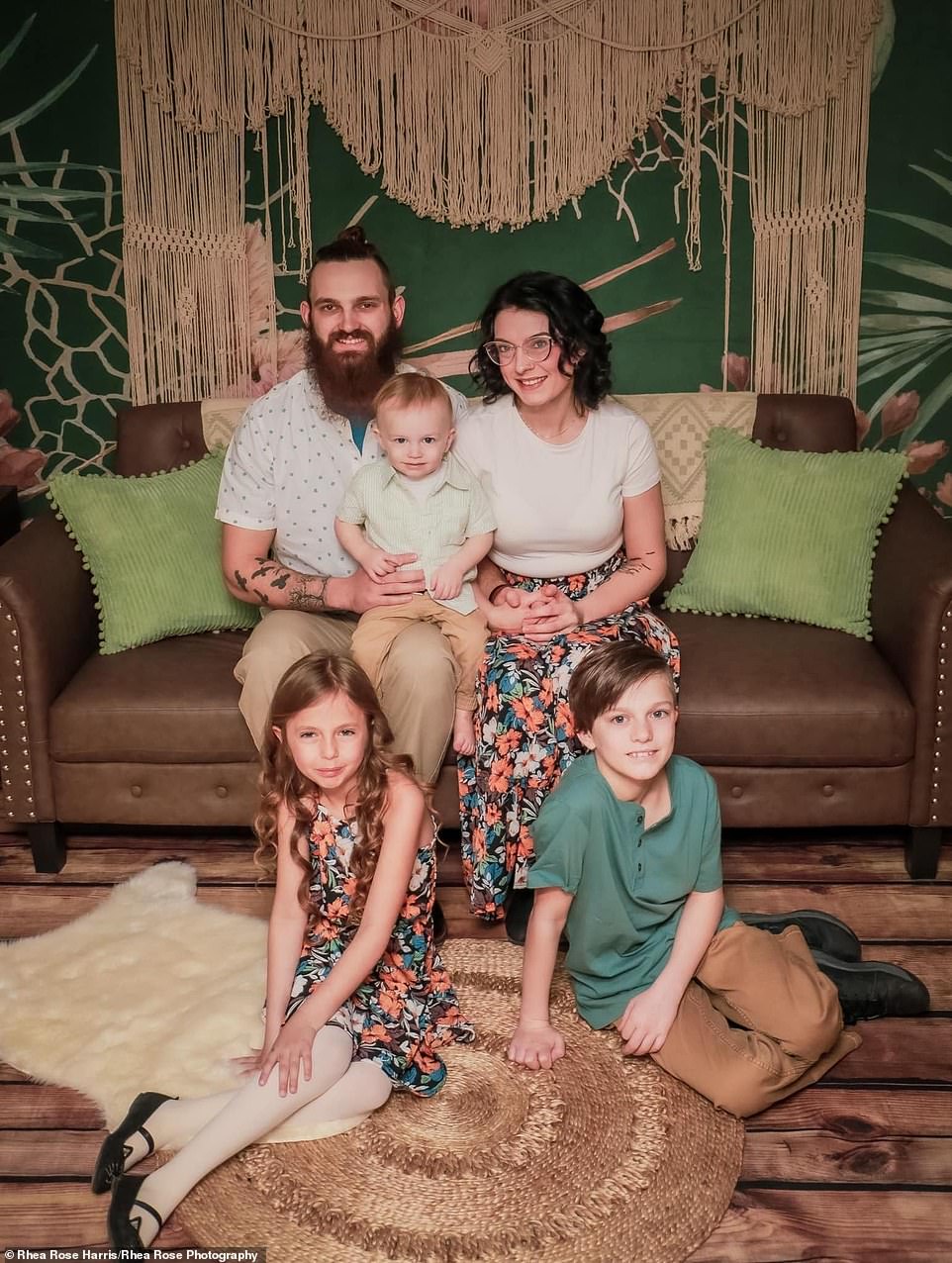 The professional shots, snapped Saturday afternoon hours before the crash, serve as the final time the family was pictured together before their lives were snuffed out

Harris, meanwhile, called eldest Deklin ‘so adorable,’ describing the youngster as a ‘clear helper and protector’ of the family.

Aurora, meanwhile, was a ‘delight’ Harris said, recalling her toothy-grin.

‘With missing teeth and her happy smile, it wasn’t hard to be drawn to her,’ she said.

On Sunday, she posted the family’s photos to Facebook, accompanied with a touching tribute, that has since garnered thousands of shares.

‘This family came yesterday,’ Harris wrote in a caption for the post. ‘The mom, Muriel and I have been messaging for a while now. They were planning their wedding and she wanted family photos so badly.

‘We talked about engagement photos, the wedding, family photos and even spoke about boudoir shoots for her fiancés gift. I got to meet them all yesterday at our first shoot. Instantly loved them. The kids were just so well behaved and adorable, and the baby, Riggs, was the best one year old I’ve ever had!’

‘Such a pleasure to have met them and I looked forward to more sessions and getting to know them.’ 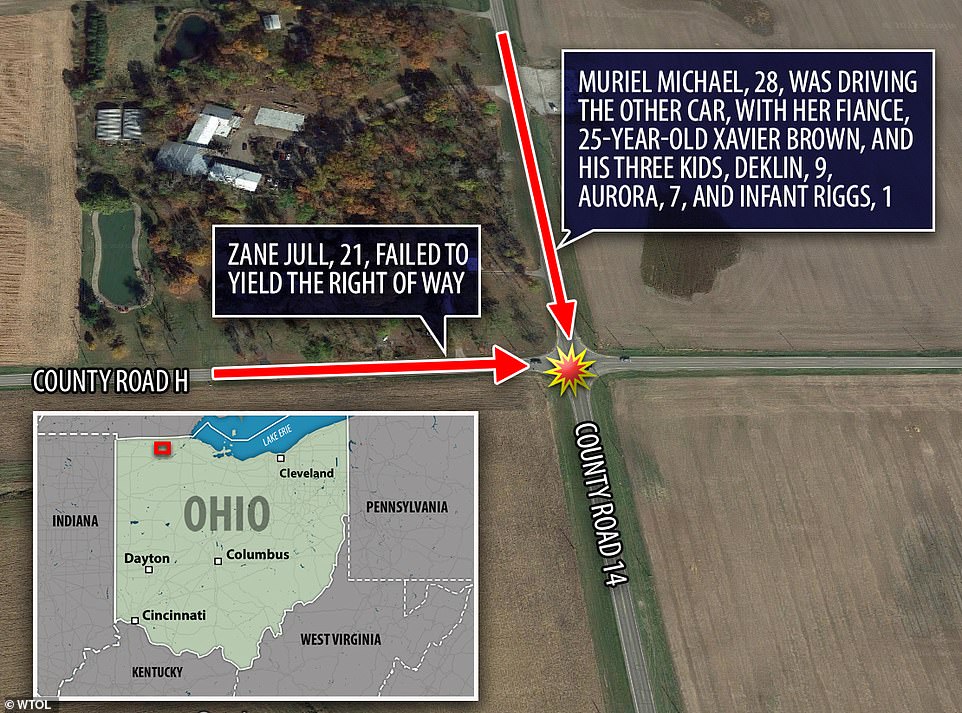 Hours after the shoot, the family was struck by another vehicle, driven by 21-year-old Zane Hull (not pictured), on County Road 14 in Clinton Township. The family had been headed southbound on the rural roadway at around 11:48pm, when their vehicle was struck Hull, who was headed east on County Road H and failed to yield at a stop sign

‘Then, later last night they were in a horrific accident,’ she remarked, noting the casualties suffered after the crash.

‘Though I did not know them well, I am devastated by this news, so I cannot imagine what their family and friends are going through.

‘My heart goes out to the family and friends of this family,’ she said. ‘I just feel honored to have been able to capture these beautiful memories for them to cherish forever.’

Word of the heartbreaking tragedy has since spread across the country, with a GoFundMe created to cover the family’s funeral expenses reaching $43,000 Tuesday – well past its $5000 goal.

Of the crash, Ohio State Highway Patrol said Sunday that some of the family were not wearing seat belts at the time of the crash. Officers, however, did not specify who. 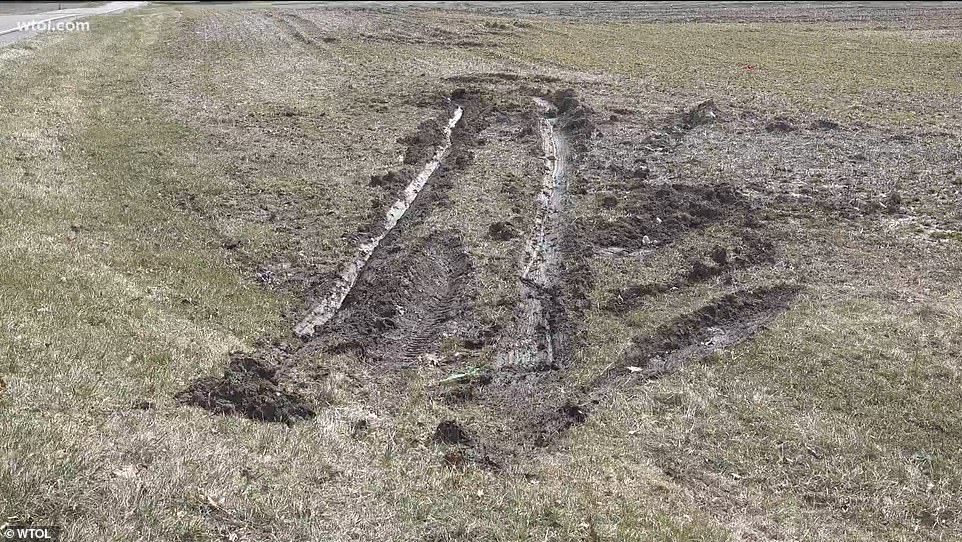 Skid marks can be seen at the scene of the crash, off County Road 14 in Clinton Township, Monday 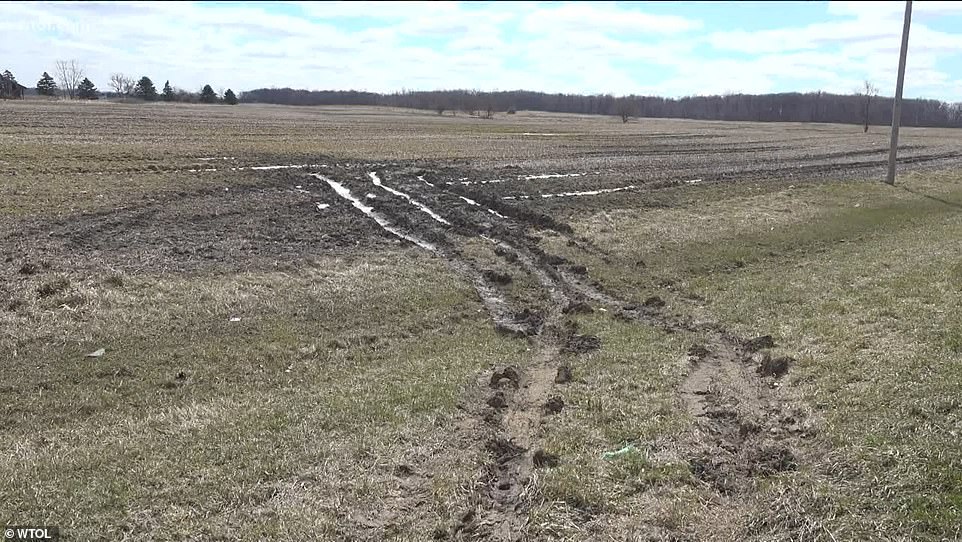 As of Tuesday, police’s investigation into the crash is currently ongoing. Hull, the driver of the other vehicle, has not been charged with a crime

Police’s investigation into the crash is currently ongoing. Hull, the driver of the other vehicle, has not been charged with a crime.