Home Wedding Cars The Queen's coolest cars that run on wine and have seats for...
Wedding Cars 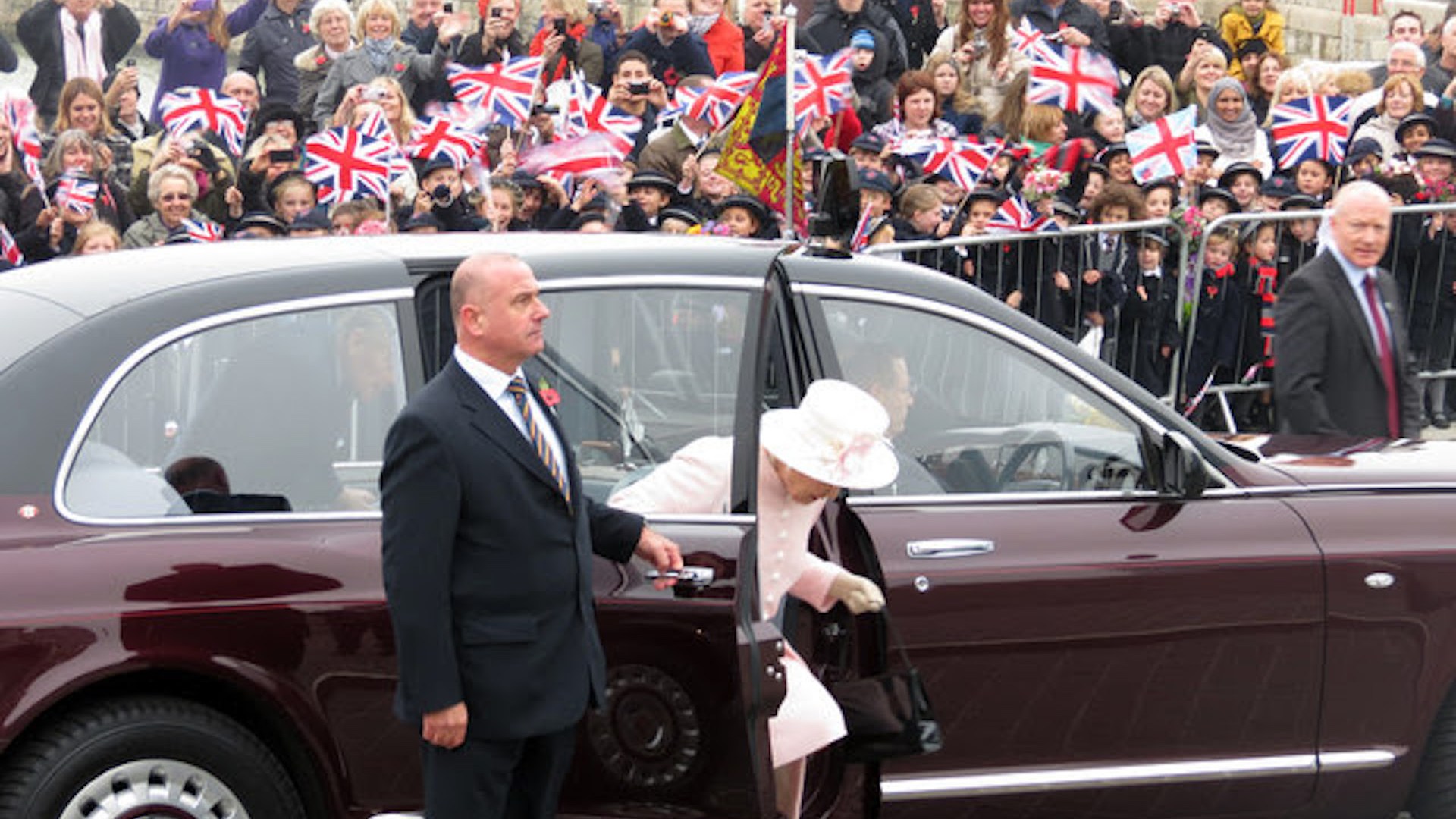 BRITAIN is back to work following four days of celebrations around the Queen’s Platinum Jubilee.

It was a chance to see some of the Queen’s cars, a collection that reportedly stretches to 25 different models.

Some of those are more interesting than others, though.

The people at Vanarama have picked out the ones that stand out from the crowd, including cars that run on wine and cheese and one designed for corgis.

There’s also a car that costs £10m, plus one with a direct line to Downing Street in the boat.

Here are the six of the Queen’s coolest motors. 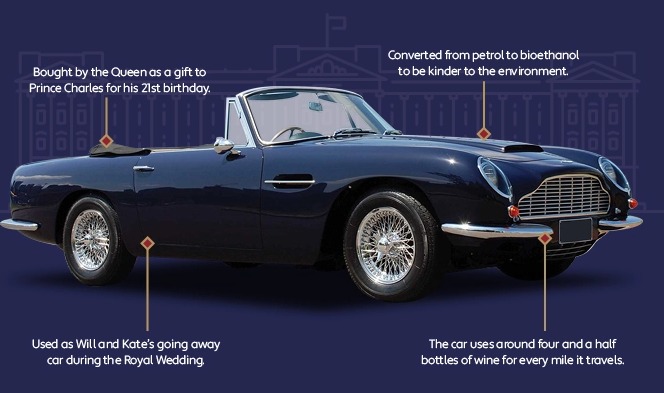 This DB6 was used by Will and Kate at their wedding

The Aston Martin DB6 Volante was bought by the Queen and Prince Philip as a gift to Prince Charles on his 21st birthday.

Famously said to be “powered by wine”, the car uses around four and a half bottles of wine for every mile it travels, after the Prince converted it for bioethanol in 2008 to be kinder to the environment.

On converting the car, the Prince said, “At first, the engineers weren’t convinced that the conversion would work, but I insisted that it would. When the conversion was done, they had to admit that the car now performs better than ever .”

The car was also used as Will and Kate’s going-away car during the royal wedding. 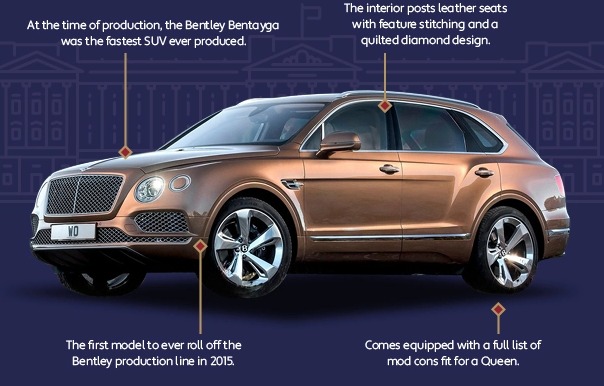 The Queen was the lucky recipient of the first production Bentayga

The Queen was lucky enough to receive the first Bentley Bentayga to ever roll off the production line in 2015.

Bentley CEO Wolfgang Dürheimer commented at the Frankfurt Motor Show that they had “reserved the number one car for her”.

At the time of production, the Bentley Bentayga was the fastest SUV ever produced, and this particular model came equipped with a full list of mod cons fit for a head of state.

The starting price for the vehicle was £160,000, although we expect this one might have cost a little bit more. 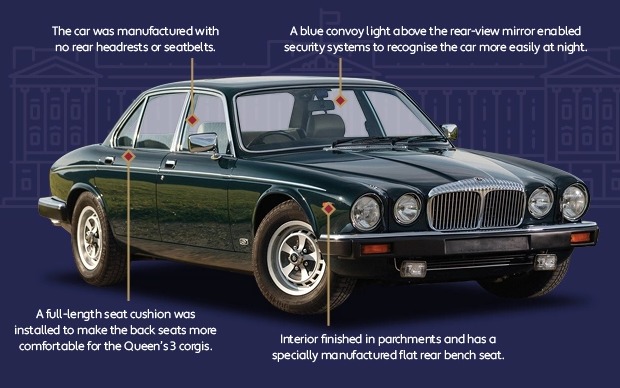 This Daimler fetched more than £80,000 when it went to auction

Although the royal family no longer owns this car, it has a rather special feature which meant we had to include it.

The car boasted an interior finished in parchments and a specially manufactured, full-length bench seat, installed to make journeys more comfortable for the Queen’s three corgis. 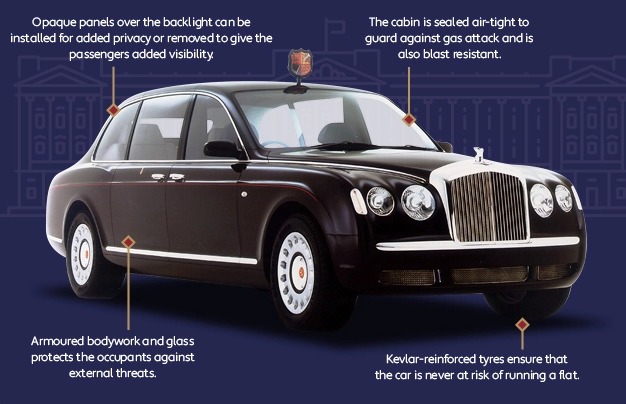 The Bentley State Limousine is by far the most expensive vehicle at the royal family’s disposal – and they have two of them!

A single one costs around £10,000,000 and is mainly used for official state business such as public engagements.

It comes equipped with enhanced security features such as armored bodywork and glass that protect the occupants inside the cabin of the car from external threats, while internally, the car is completely air-tight to guard against potential gas attacks.

The car also comes equipped with a blast-resistant chassis and Kevlar-reinforced tyres. 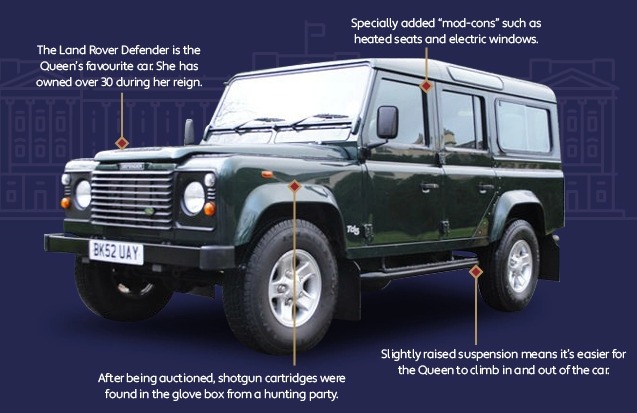 The Queen has owned over 30 Land Rover Defenders.

This particular model has specially added mod cons, such as heated seats and electric windows – features you rarely find on a Defender, which normally has a back-to-basics outlook.

It was built specifically for the royal family by Land Rover in 2002 and was bought by Sandringham, despite the estate typically leasing cars rather than purchasing them.

After the Defender was auctioned, shotgun cartridges were left in the glove box from a hunting party. 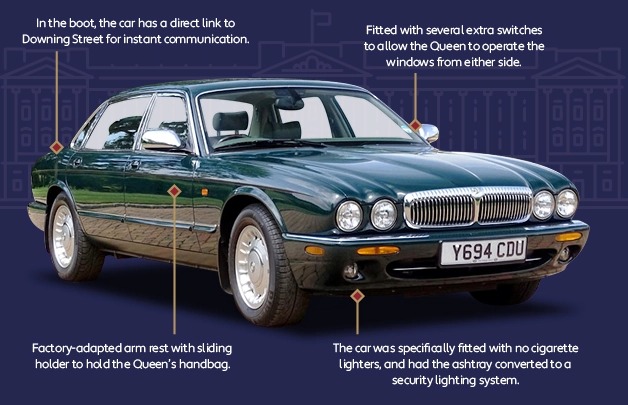 The Jaguar Daimler V8 Super LWB is a specially built model used to drive around Windsor Castle and Buckingham Palace.

It has a factory-adapted armrest to hold the Queen’s handbag, and also several extra switches to operate the windows from either side.

The interior of the car was specifically made with no cigarette lighters and the asian was converted to a security lighting system.

In the boat, the car has a direct line to Downing Street for instant communication. It was auctioned in 2013 and sold £30,000.