We’re homeless but had dream wedding 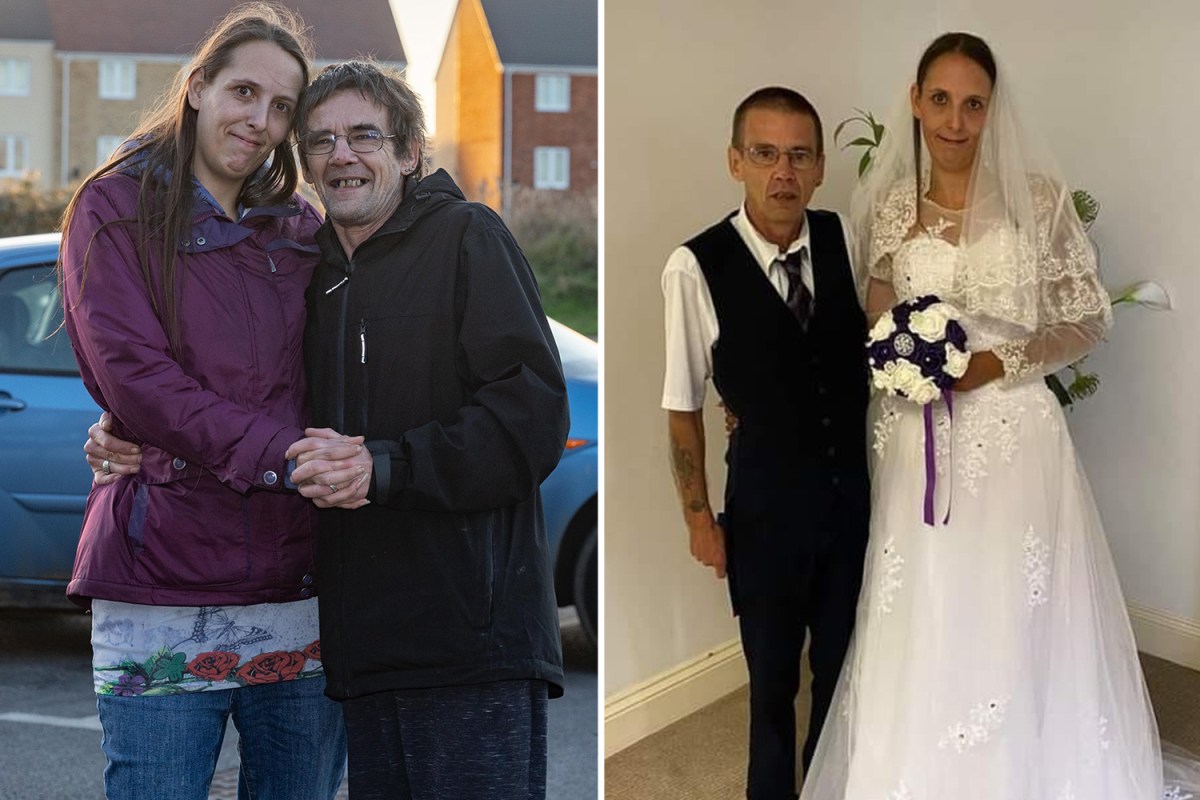 A HOMELESS couple got hitched with £13 wedding rings despite living in their car for a year and surviving on £500 a month.

Newly weds Paul and Ingrid Stannard lived in a battered Ford Focus and spent their monthly benefits cash on petrol and essentials. 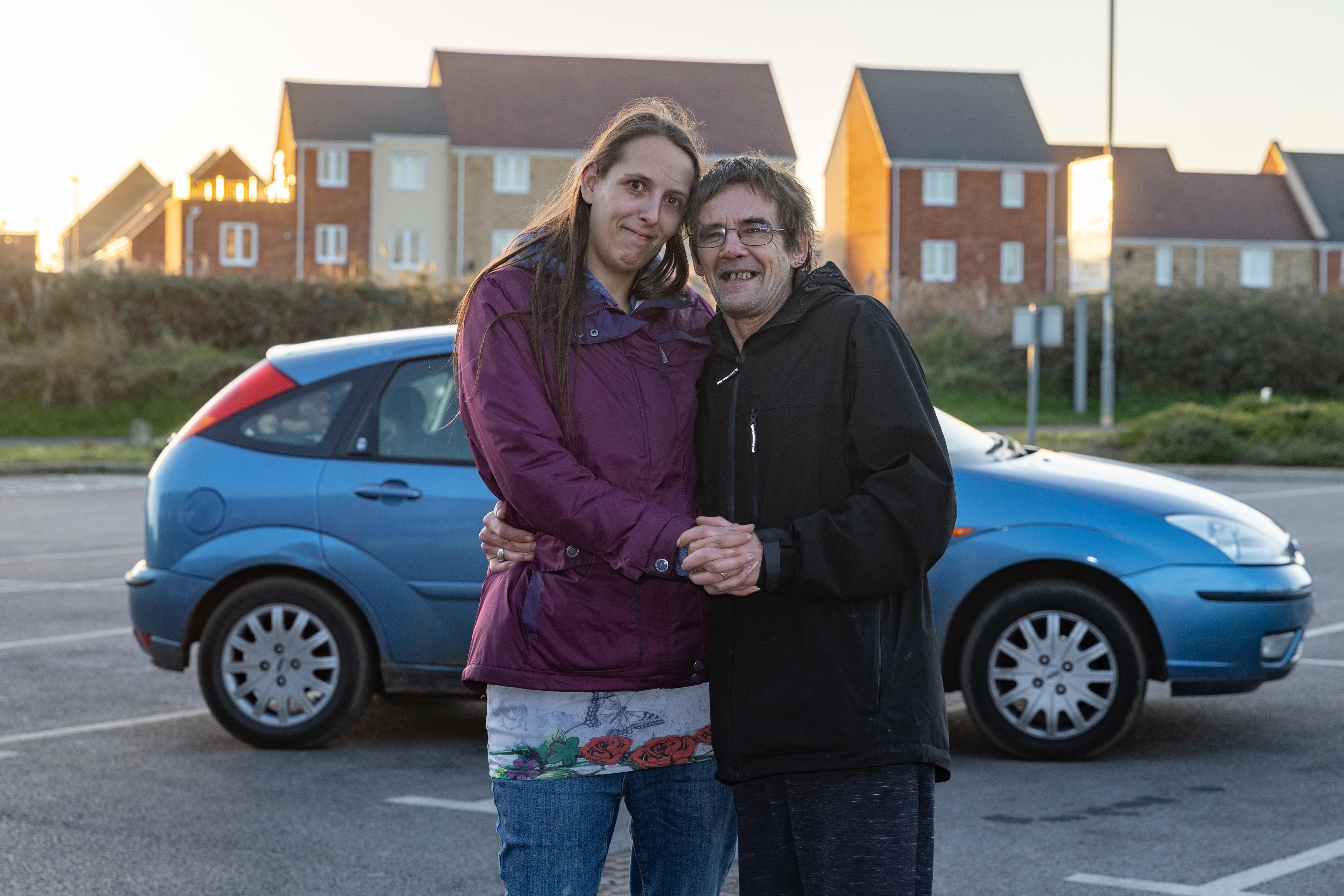 Paul and Ingrid say their wedding was the best day of their livesCredit: Terry Harris

The special day saw them wed at a registry office before spending the wedding night at a hotel paid for by a relative.

The next day they returned to their 20-year-old banger.

Ingrid told The Sun: “Our wedding was the best day of our lives.

“We did it at a registry office with the family.

“It was wonderful to get dressed up my sister did my make up and hair so I looked beautiful and Paul looked fantastic too.

“The money doesn’t matter to us, what’s important is our love together.

“My family paid for the wedding as a present and they paid for us to stay in a hotel as well, it was really special.

“The hardest part for us was staying apart the night before. We have been together four years and haven’t left each other’s side.

“So to be without Paul was very hard, but nothing was harder than returning to our old car the next day.”

They fell on hard times after their rented flat was sold and a spell sofa-surfing with pals came to an end.

We saved up and got a £60 dress on eBay and bought a pair of rings for £13. The money doesn’t matter to us

Since last year the couple have been tipping mostly in supermarket car parks – but have to watch out for parking wardens.

They live on monthly £500 Universal Credit payments, which they put towards petrol and bare essentials like food and clothes.

Before bedding down in the front seats, Paul and Ingrid drive around town to keep the heating going and warm their car up.

Sometimes they turn on the car radio for company, but soon turn it off to conserve the car’s battery.

Paul and Ingrid, of Kings Lynn, Norfolk, claim housing bosses ignored their pleas for a home and said they were not a priority.

Following a string of requests to West Norfolk Council, the unemployed couple have now been offered temporary housing at a B&B.

Ingrid told the Eastern Daily Press: “You think when you get married, things are going to get better for you.

“It’s about time because with our anxiety, our depression, it’s all gone through the roof.

“We don’t know where we will be yet.

“They’re going to be putting us in touch with Shelter, which is a homeless charity, to put us in temporary accommodation until we can get back on our feet and get a proper home for ourselves as a happy or semi-happy married couple .”

Paul and Ingrid have known each other for seven years and got married in September 2021 despite being down on their luck.

They both suffer from mental health problems including anxiety and depression.

Despite spending every night in the car, they are given food, laundry and hot showers by local charity the Purfleet Trust.

But what they’ve always wanted was a roof over their heads.

“We support each other and get by as best we can.

“I feel happy now because they’re now doing something about it.”

A West Norfolk Council spokesman said: This council has been providing advice and assistance to Mr & Mrs Stannard for a number of months.

“It is vital when people contact the housing options and homelessness teams that they provide all the information they can about their situation, and keep the dialogue open with officers so that the right support can be offered.

“If circumstances change, they should get in touch to discuss what help might be available.

“The council is continuing to provide advice and support to Mr & Mrs Stannard tailored to the most up-to-date information provided to us.

Borough Council of King’s Lynn & West Norfolk’s Cabinet Member for People and Communities Cllr Sam Sandell added: “As a council we are doing everything we can to eradicate homelessness in the borough, and we have worked closely with partners to put a number of measures in place.

“We have done everything we can within our powers to assist this couple but can only work with the information we are given at the time.

“Now that we have been given more information, we have been able to place the couple in temporary accommodation and we are supporting them to find suitable permanent accommodation, hopefully bringing a positive resolution to this case.” 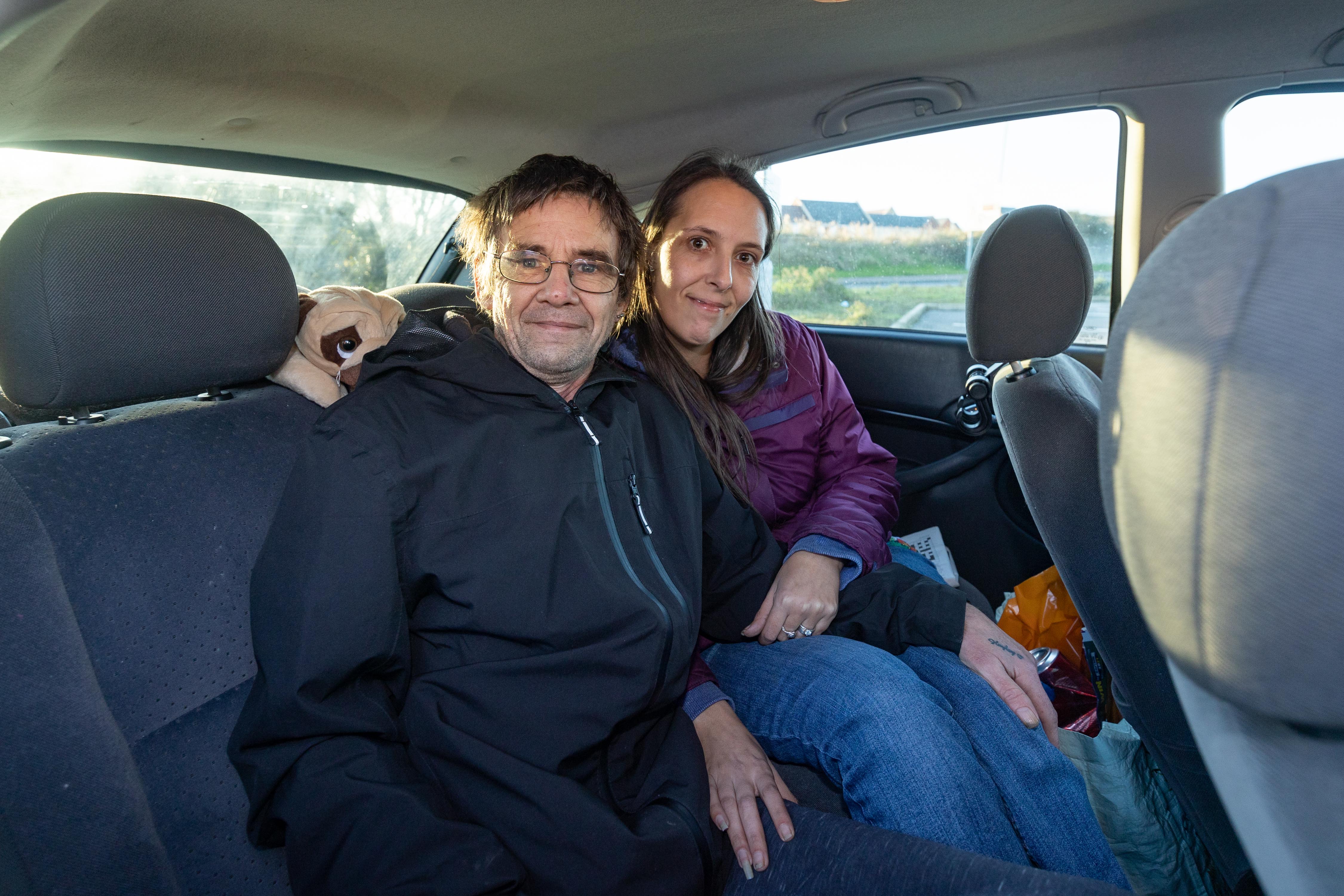 Paul and Ingrid got married at a registry office in September 2021Credit: Terry Harris 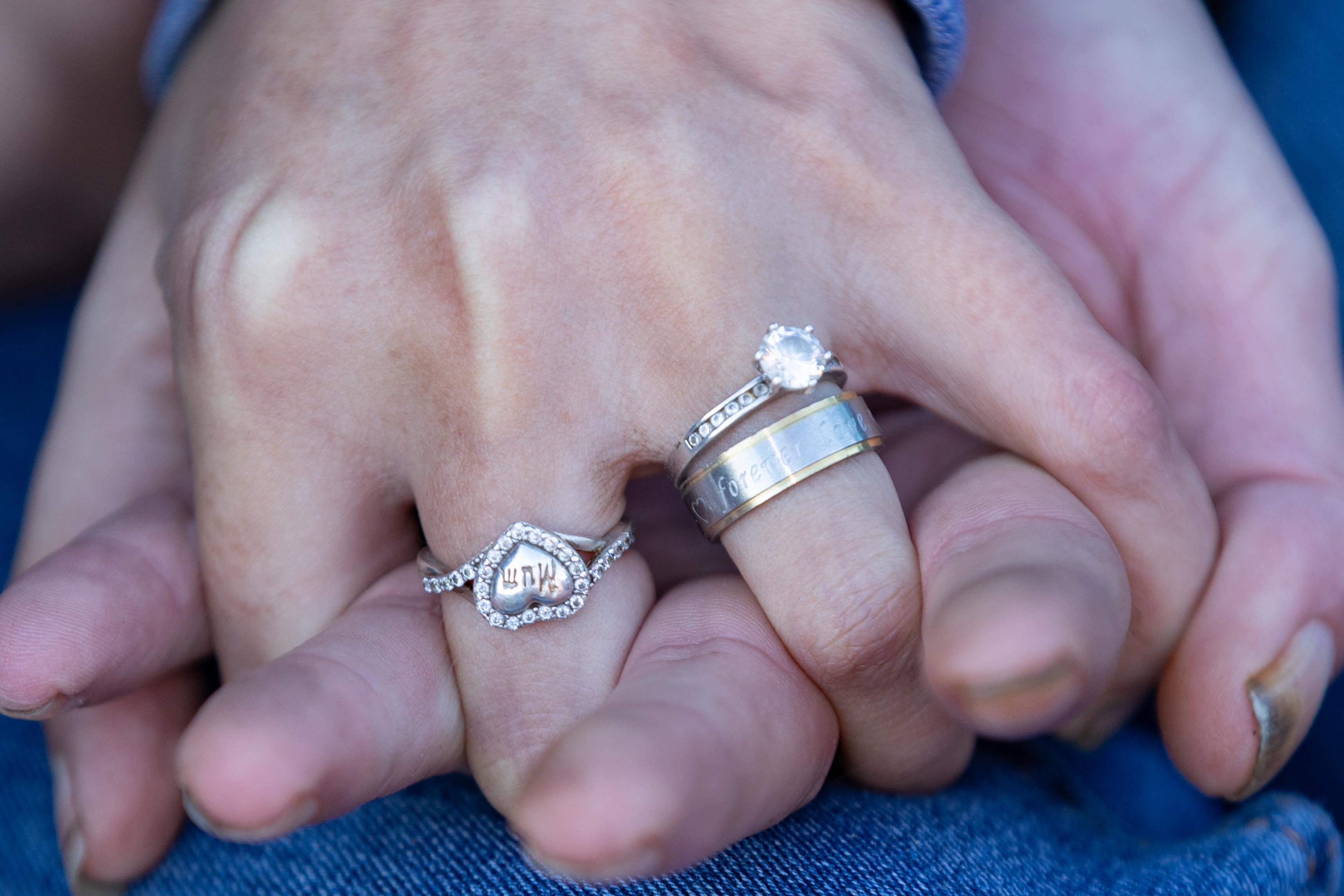 Ingrid and Paul spent £13 on their ringsCredit: Terry Harris 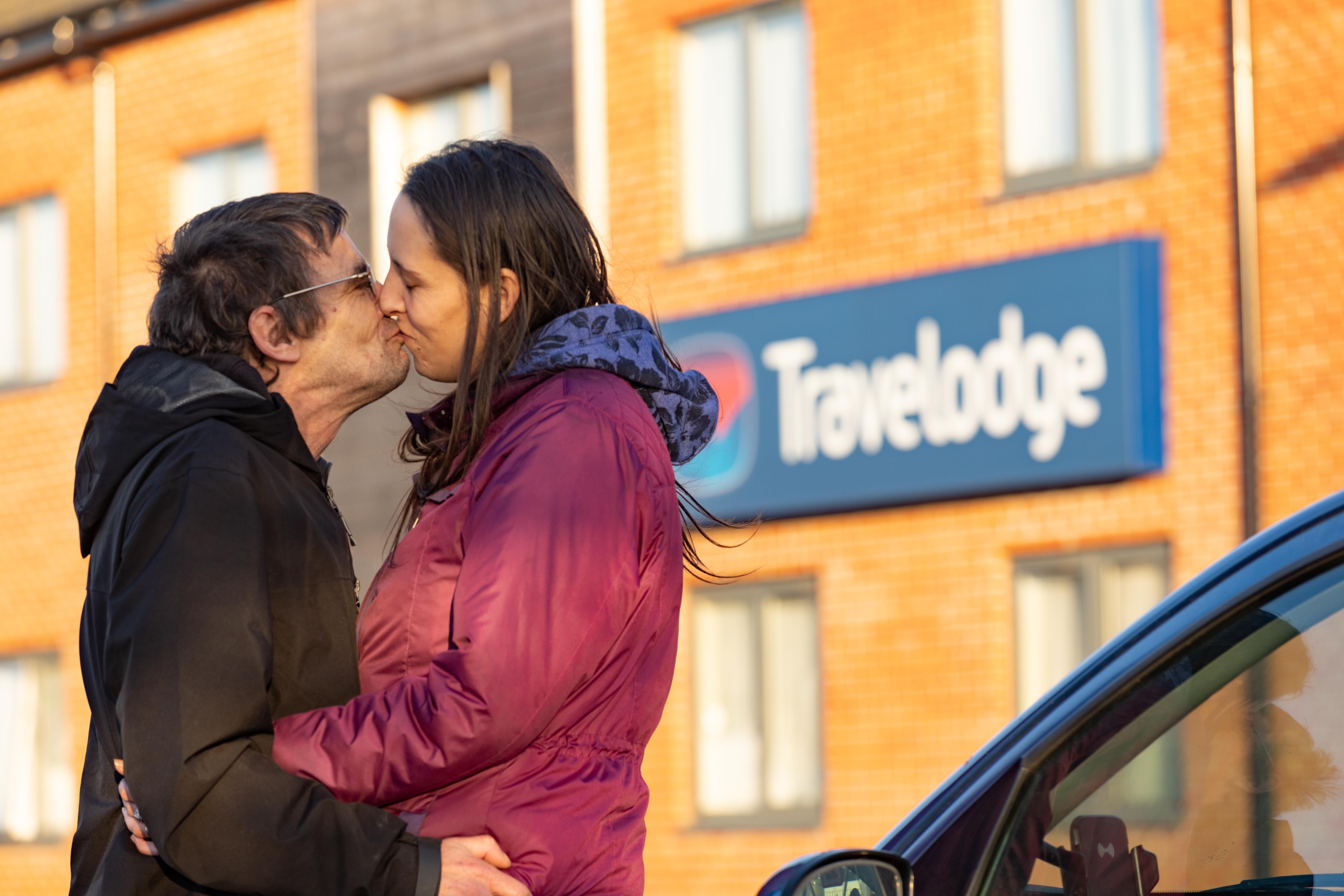 The couple often stayed in an underground Sainsbury’s car parkCredit: Terry HarrisHomeless family-of-four move into caravan outside council officers after being evicted from house