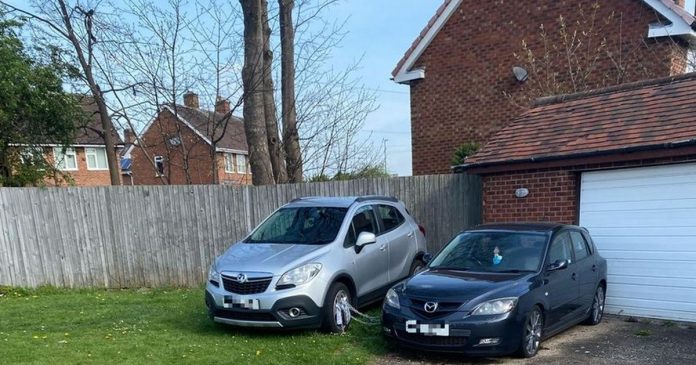 A woman has finally found out why a holidaymaker mysteriously left her car parked in her driveway for nearly a week. Debbie Flynn, who lives next to Birmingham Aiport, was left flummoxed when the silver Vauxhall Mokka was left next to her garage on April 12.

She spent seven days wondering why the motorist had gone so far as to unlock gates to her drive off to park there. But now she has found out after a note from her landlord.

Debbie had suspected fraudsters had sold her drive as a cheap parking spot for the airport after police confirmed the car was not stolen and her landlord said he knew nothing about it. But the mum has now received an email from her landlord, who had forgotten he’d registered for a parking app years ago.

READ: Burslem chippy tops the hygiene charts – but does its food do the same?

Debbie said: “One of the first things I did when I found the car was to ask the landlord if he knew anything about it and he said he didn’t. The landlord has since been in touch and said that years ago he opened a parking app for his drive.

“He has just checked his emails and a female driver has emailed him saying she has parked on his drive, gone on holiday and will be back next week. I can’t believe it!”

Debbie added: “My first thought when it happened was that it was my landlord. I did send him a text that wasn’t very polite but when the landlord made contact, he reassured me it wasn’t his car.”

Debbie and her partner Leon had originally put chains around the car’s wheels so the returning motorist would have to give an explanation for parking there. But that has all changed now they have got the bottom of the landlord’s lapse in memory.

Parking apps, where residents rent spaces on their property, have become a popular way to earn extra money especially for those living near airports, train stations and city center sites. But they have also become targeted by fraudsters who get money off unsuspecting motorists to park at land they don’t own.

The mum-of-two informed police when the car first appeared but officers said they were powerless to move the Vauxhall Mokka from the grass verge of their drive as it was a “civil and not criminal matter”. If Debbie had affected the car while trying to move it, she would be liable for an offense of criminal damage under the current law.

NEWSLETTER: Sign up for email alerts from StokeonTrentLive direct to your inbox