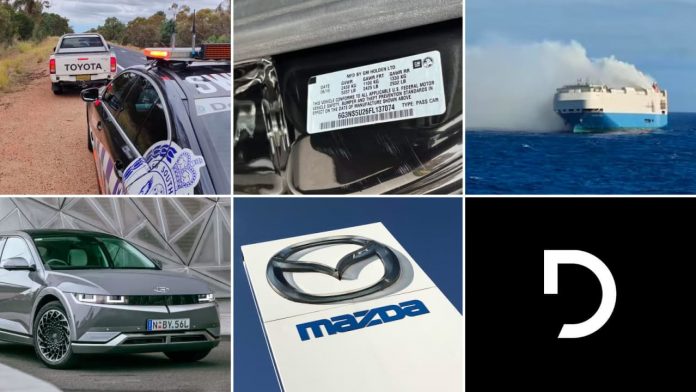 Want to stay up to date in the world of automotive news? These are the biggest stories from the past week.

Each week we’ll keep you up to speed and bring you the ‘watercooler’ information of what has happened in the world of cars and motoring with the five-biggest stories we’ve covered. Here’s what you need to know…

A young driver piloting a Toyota HiLux clocked 193km/h on the highway east of Griffith – only hours after managing to pass the test for a provisional license.

The 18-year-old had his license suspended, while police say the driver received a penalty notice for speeding and not displaying his P plates. You can read the full article here.

Right-hand-drive Holden Commodore SS ute going to auction in America, but with plenty of questions from experts

While many asked General Motors for Holden’s car-based ute in North America, it never arrived. However, one has popped up online – but now without red flags being raised. The vehicle has been listed as a ‘2015 Chevrolet Caprice Ute Conversion’ which has some questioning whether the listing is actually legal. See the full story here.

We now know what was onboard the Felicity Ace ship that sank earlier this year, which was carrying thousands of luxury cars.

It’s been revealed that a significant amount of Audi E-Trons, Q3s and A5 Sportbacks were among the vehicles, along with various Porsches, some of which included Panameras, Cayennes and 718 sports cars. To see the full list, read our story here.

For the first time in the award’s history, South Korean brand Hyundai has been awarded World Car of the Year. The celebrated vehicle also took home accolades in the Best Design and Best Electric Vehicle categories for the year. See all the details here.

Mazda Australia heading back to court

At least nine Mazda customers were asked to cover the costs for replacement engines that should have been included under warranty, according to the ACCC. It’s an ongoing dispute that sees Mazda Australia heading back to court. For the full article, see here.

There’s a new BMW 7 Series limo on the scene, with grilles bigger than ever, more technology than before, and the option of electric power. Click here to read the full story.

These are some of the biggest stories of the week. You can read all the car news covered by Drive on our news feed here.

Emma has been on our television screens for over a decade. Most of her time in the industry has been spent at racetracks reporting at major motorsport events in Australia – from TCR and Superbikes to Porsche Sprint Challenge and Supercars. Emma has also hosted various MotoGP and F1 events interviewing the likes of Daniel Ricciardo and Jack Miller. Having previously presented on an automotive show, she made her move to the Drive family in 2020. Fiercely proud of her Italian heritage, Emma is a coffee loving, stylish-black wearing resident of Melbourne.