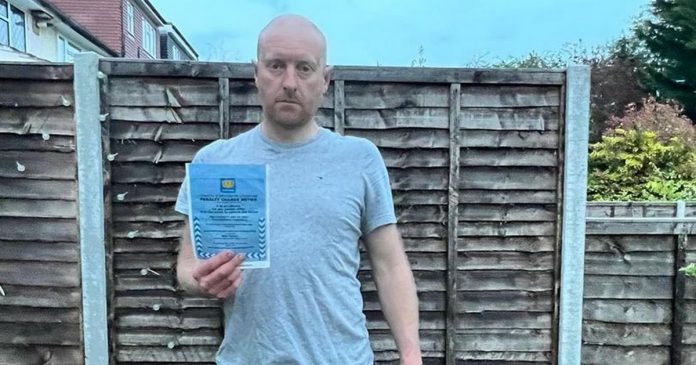 Everyone has a tale of being hard done by the parking attendant, but this dad has a story that possibly pips them all.

Matthew Cole says he was left “gobsmacked” after opening a letter containing a £65 parking fine due to his car’s shadow being in a disabled parking spot. The self-employed gardener said he received it after parking outside Blackheath Post Office in Lewisham in March, with the letter from Lewisham Council alleging that he had parked illegally.

However, Mr Cole said the photos that had been sent to him by the council showed that he had parked in an unmarked bay, with only the shadow of his Ford estate car appearing to be in the disabled spot, MyLondon reports.

Mr Cole says he was taking his daughter to “a football match on the heath and had parked there before without a problem.” He went on to say: “It’s absurd. There’s no signage where I parked and the photos they sent me only show the shadow of my car in the disabled spot – having not got a ticket at the other times, I personally don’t think I should have got a ticket this time.”

“It’s completely wrong. They’re enforcing something that’s not there. I think £65 is not a lot to many people today but the principle is wrong. If you don’t pay the fine in a certain time it doubles to £130 which is a lot.”

After receiving the penalty charge notice, Mr Cole appealed the fine, saying there was no disabled parking sign next to the bay where he was parked. Lewisham Council rejected his complaint and stuck to its claim that he parked in a spot reserved for disabled badge holders. But Mr Cole remains determined not to pay the fine and has lodged a second complaint against the fine.

Want our best stories with fewer ads and alerts when the biggest news stories drop? Download our app oniPhoneorAndroid