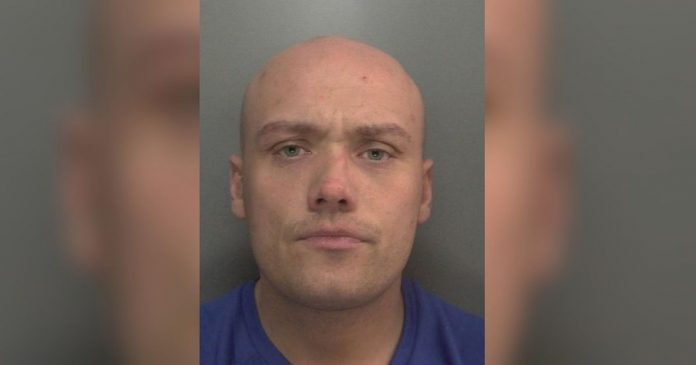 A vigilante involved in the torching of an innocent man’s Jaguar had previously been locked up for his role in a ‘happy-slapping’ torture ordeal.

Ross Lambert was jailed this week after a court heard he and an unknown associate wrote off the car of a man they wrongly believed was a pedophile. The judge said there were similarities between his latest case and the suffering he inflicted upon a teen in a Wirral field 11 years ago.

Now 28, Lambert appeared at Liverpool Crown Court on Wednesday after admitting arson. During the incident, in October, he smashed the window of the white Jaguar with a hammer.

Iain Criddle, prosecuting, said: “The second male threw a petrol bomb through the smashed window. The fire was put out by the victim himself. He was in his house and heard banging outside and saw what had gone on. The defendant wiped his hand on the bonnet of the car which he had cut while smashing the window and as a result DNA was recovered and identified and he was later arrested.”

The court heard reference to the 2011 case that saw the then 17-year-old Lambert initially handed an indeterminate sentence. In that attack, an 18-year-old victim was taken to an isolated field and was punched, kicked and had boiling water poured over him. Lambert and another teen led the five-hour torture, which was filmed by another boy.

Judge David Aubrey, QC, told him: “Torture of this nature and degree cannot be tolerated in a civilized society.”

A mugshot taken of Ross Lambert in 2011 when he was sentenced for a sadistic five hour torture attack on a teenager.
(Image: Police)

He added: “In my judgment, there were acts of sadism. You tormented this young man. You tortured him. You dominated him for about five hours… All through this time, laughter, enjoyment, pleasure followed by filming of the events as they unfolded. As they unfolded he begged for it to stop. But to no avail.”

Lambert was branded a “very dangerous young man” over that attack and was ordered to serve a minimum of four years behind bars, with his release dependent on the views of the Parole Board. Martine Snowden, defending Lambert over the arson this week, said: “He is determined to make a change and wants to address his drinking and drug taking. He has had enough of spending time in prison.”

The judge, Recorder Ian Harris, described Lambert’s arson as “misguided vigilantism” and said: “This sort of behavior is lawless. You told a probation officer the offense was committed under the influence of alcohol and cocaine. It was clearly a pre-planned targeted attack designed to terrify the victim regardless of possible consequences of the fire taking hold. You clearly pose a high risk of harm. You have a clear propensity to use violence at times of emotional challenge.”