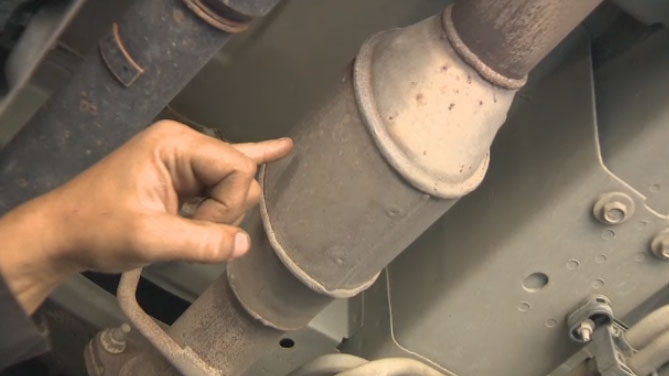 A Greater Toronto Area police force is warning of a spike in automobile part thefts after more than 30 reports of similar incidents were received in the last six weeks.

Nicole Wood left her Hyundai Tucson at a dealership to have some maintenance work done and was shocked to find that thieves had crawled under her SUV and cut off the catalytic converter overnight.

“I got the information from police that my catalytic converter had been stolen while my SUV was parked at the dealership,” Wood told CTV News Toronto Wednesday.

Wood said her parents had the same thing happen to their Hyundai Tucson two weeks later at a different dealership.

“My vehicle was one of five the night my catalytic converter was removed and my parents SUV was actually one of nine vehicles affected in the same evening” said Wood.

Investigators said any vehicle parked outdoors is a potential target, and that catalytic converters, which are attached to a vehicle’s exhaust system, contain precious metals, such as rhodium, platinum and palladium, that thieves can try to sell.

“It does happen at car dealerships. It happens in people’s driveways. It happens at rental places and in apartment buildings,” Constable Ryan Anderson with Halton Police said.

“They can steal these converters in under 60 seconds,” he said. “They cut it off and they’re gone.”

While a thief could get up to $300 for one converter, it can cost the vehicle owner thousands to replace them.

Wood said that while the dealership where her converter was stolen has agreed to replace it at no charge, her parents have been told they’ll have to pay for a replacement or go through their insurance.

“My parents are being told they’ll have to pay $4,500 to repair it, which is ridiculous considering they took it in for a warranty issue,” she said.

“And if they go through their insurance, they’ll have to pay a $1,000 deductible.”

In the US, some shops are now engraving catalytic converters with identification and selling converter covers to prevent them from being stolen.

Wood said she no longer feels it’s safe to leave her vehicle overnight at a dealership.

“I will take it back home and bring it back the next day,” she said.

If your converter has been stolen, your vehicle would sound very loud, like the muffler is missing.

Halton Police recommends vehicles be parked in locked, well-lit areas and in a way that makes it harder to access their underside, for example, against a wall or by other vehicles and to use security cameras.