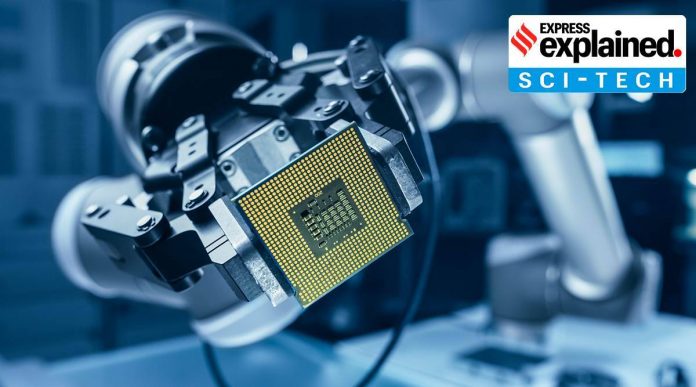 Mercedes-Benz India recently published advertisements inviting potential customers to “wait a little while” for vehicle deliveries. It’s an unusual request for the German luxury automaker – but it’s not just asking customers to be patient.

Car waiting times are currently among the longest in recent times, and a lack of critical parts such as semiconductor chips is cited as the main reason. Both global and Indian manufacturers have reported production issues related to the availability of chips and have been forced to slow production.

Why is this happening?

A common component found in automobiles, electronic goods, medical devices, and smart devices is the integrated circuit (IC) chip. ICs are the basis of all modern electronic devices, and the chip is their brain and nerve center. The circuit is essentially a collection of electronic components – resistors, transistors, capacitors – plugged into a small silicon chip and connected together to perform a single function or multiple functions.

Before the Covid-19 pandemic, an average of around one trillion chips were produced worldwide each year. That’s roughly 120 chips per person – which seems like a lot when you consider that only a small percentage of the world’s population uses high-end, high-chip devices. But today’s chip shortage has a lot to do with the pandemic – and how it changed consumer behavior.

When country by country was closed, people bought more computers, phones, and play equipment than they stayed at home. And with factories closed, automakers reduced chip purchases. This has fundamentally changed supply and demand.

Now, with automakers’ demand picking up again, chipmakers are struggling to adapt production and supply to sectors such as automobiles.

Automakers are using chips in everything from sensors for power steering and fuel injectors to navigation systems and parking cameras. As cars become “smarter” and “connected”, electronic parts and components now account for 40% of the cost of a new internal combustion engine car, compared to less than 20% two decades ago. Chips make up a large part of this surge.

Why couldn’t the automakers stock up?

With just-in-time deliveries, automakers typically kept low inventory levels and relied on an electronics industry supply chain to supply production lines as needed. There were two reasons for this: a steady decline in input prices and an improvement in the processing power of chips. The number of transistors mounted in IC circuit chips has doubled every two years. This phenomenon, commonly known as Moore’s Law, has meant smaller devices with higher processing speeds.

Much of the advances in chip design, however, have not been on the automatic side. The auto industry has by and large stuck to basic chips that have performed the same functions over the years – mostly to aid power steering or navigation assistant. Given the auto industry’s traditional reliance on low-end chips, leading chip manufacturers have focused on the non-auto segment. The basic products used in the automotive industry, such as microcontrollers, are manufactured under contract in older foundries.

In addition, the auto industry only spends around 40 billion US dollars a year on chips – about a tenth of the world market. In comparison, only one company – Apple – spends more on chips just to make one product – iPhones.

How is the semiconductor market structured?

The big three in chip manufacturing are Intel (USA), Samsung (South Korea) and TSMC (Taiwan). Intel and Samsung are integrated device manufacturers that can design, manufacture and sell chips from end to end. TSMC is a foundry that makes chips for companies that don’t have factories or factories of their own. It will cost at least $ 5.4 billion to build a facility with the latest 5-nanometer production lines, according to consulting firm McKinsey. An example of the 5 nanometer chip is the A14 Bionic that powers the iPhone 12. These are made by TSMC.

Is the chip shortage something new?

Not really. Something similar to the 2021 “chip famine” has occurred at least four times in the past three decades, and the impact has been greater on every occasion. Reasons included the 2011 earthquake in Japan and an increase in demand after the PC boom of 1994 and 1995. In almost all cases, bottlenecks occurred after the supply side failed to catch up.

One of the earliest chip shortages – 1988 – was traced back to a 1986 US-Japan semiconductor trade agreement. To deter Japanese manufacturers from dumping chips in the US, the Ronald Reagan administration persuaded Japan to sign a pact to revive American production.

A March 12, 1988 report in the New York Times said the pact forbade Japanese companies from selling below cost, and the Japanese government advised companies to limit production “which would dry up the oversupply that prices prices had kept low “. In addition, under American pressure, Japan became “stricter in issuing export licenses for chips, which slowed exports.” While these measures helped limit chip production and stop dumping, “prices are up [now] so high that the minimum prices required in the agreement are controversial, ”the report says.

Pulling the reins on the Japanese helped Taiwan’s semiconductor industry – which grew from job shops for other firms to a multi-billion dollar industry. Companies like TSMC were direct winners – TSMC generated 54% of global foundry revenues of $ 86.65 billion in 2020, according to TrendForce. Taiwan scored 64%.

“A high dependency of semiconductor suppliers on a single source in Taiwan for MCUs combined with general capacity constraints at IDMs (manufacturers of integrated devices) and foundries will lead to bottlenecks by the third quarter (July to September 2020). This is compounded by general infrastructure deficiencies in older semiconductor processes as well as the high demand for power chips from neighboring industries, ”said IHS Markit in a February 2021 report.

So what happens now

Countries with or without a semiconductor manufacturing footprint are working to secure their chip supply. In May 2020, TSMC announced a $ 12 billion factory in Arizona. Earlier this month, Intel announced $ 20 billion to build two factories in Arizona in what is seen as a challenge for TSMC and Samsung.

The Indian government has renewed its nearly decade-old efforts to get companies to set up semiconductor manufacturing facilities in India or to acquire semiconductor factories outside of India. The centre’s earlier attempts to make India a stand-alone semiconductor factory were largely cornered by corporate demands to cushion the inevitable high capital investments with various sops.

Given that semiconductor manufacturing is a complex process, its high reliance on a single source makes the supply chain vulnerable to shocks. “A chip takes between 12 and 16 weeks from order to shipping for relatively complex devices such as MCUs (microcontroller units) and up to 26 weeks for an inertial sensor used in a vehicle stability system. The supply chain is complex and managing its dependencies along the chain through carefully managed ordering of the order and maintaining inventory is critical to delivering on time. This balance is easily upset by unusual market dynamics such as the Covid-19 pandemic. And this crisis has highlighted the fragility of the ecosystem, especially when other dynamics are involved, ”noted IHS Markit.

In particular, an essential feature of a chip shortage is that almost every such event brings with it aftershocks, since the first event creates a pent-up demand that becomes the cause of the subsequent famine.