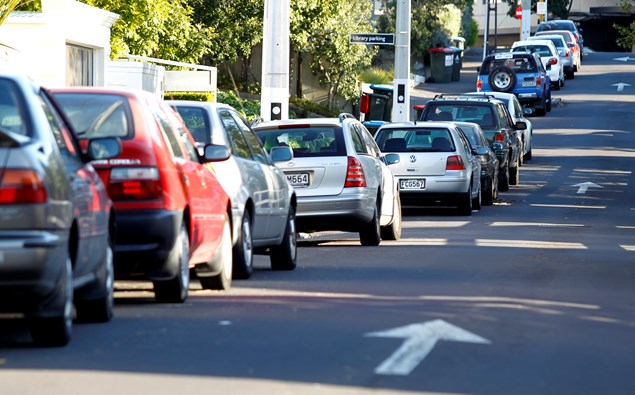 For the last five years I’ve lived in an apartment on the Karangahape Ridge, with amazing views across central Auckland.

I’m very lucky. If I look North on a good day, I can see Tiritiri Matangi Island and even Hauturu Little Barrier. South is Maungawhau Mt Eden. South West is Eden Park. And dominating my view from the 16th floor is a view right down the guts of K Road.

There’s always something happening on Karangahape Road. I can see the beautiful people walking their designer dogs or alfresco-ing in the afternoon sun. I can see people driving off in their new vehicles at the Tesla showroom. I can see drunks stumbling about on a Friday night, homeless people chatting to each other, and the clientele at both of the Peaches and Cream stores (It’s not who you might expect).

I’m also afforded a unique view of the traffic.

Over the last five years, Karangahape Road has changed. They’ve introduced partial bus lanes. They’ve built bike lanes in both directions. They’ve restricted parking. And watching on from the 16th floor, the effects on the traffic don’t take a PHD to decode. They’re obvious.

Firstly – and this isn’t rocket science!! – Buses are far and away the most efficient way to transport a lot of people in the city. When the traffic snarls and slows to a painful crawl, as it often does, I stare down at the cars as they sit there idling. One bus has ten or twelve times the capacity of a single sedan or hatchback. When it can use the K Road bus lane, it immediately overtakes the idling vehicles as they wait. Easy.

Secondly, more often than not, the fastest way down K Road is on a bike. I often ride mine along the cycle path and stop at a few places on the way. If there’s bad traffic, in the time it takes a crawling car to travel from the Ponsonby Road intersection to Pitt Street, I can dismount my bike to collect a coffee and a heated cinnamon scroll and still beat them there. happy days

My third observation from on high, is that parking spaces are an excellent way to shut down an entire lane of traffic. It’s crazy. It’s so inefficient. K Road has clearways between certain hours, which open up the traffic to two lanes in both directions. When the clearways aren’t in place, in order for a handful of cars to park, the entire road has a lane restricted, and the traffic often snarls. At 2am on a Wednesday it’s not an issue. But at busier times, it often means cars are bumper to bumper for the length of K Road. It’s madness. The convenience of a few is prioritized over the convenience of hundreds or thousands more.

Why am I telling you this? It’s not because I want to spend my long weekend wading through your hate mail. I know how transport changes get people going. Auckland is proposing changes to onstreet parking to some of its roads and from some of the initial feedback, you’d worry the world was ending. This is something all of cities have to consider, but even though the changes concern about 3.25% of roads in Auckland, they’re already facing stern opposition.

Smarter lane usage in busy areas is such an obvious, cheap solution to the challenges faced by growing cities in a warmer climate. As our population increases, congestion and productivity and won’t improve unless we move people more efficiently.

The irony of the transport debate is that the loudest critics of bus lanes, cycle paths, and reduced street parking are those who will actually benefit the most from the changes. If you are absolutely determined to remain glued to your steering wheel for every journey in the coming decades, it’s in your interests for councils and transport authorities to reduce congestion. Take it from the view on the 16th floor. Get with the times.