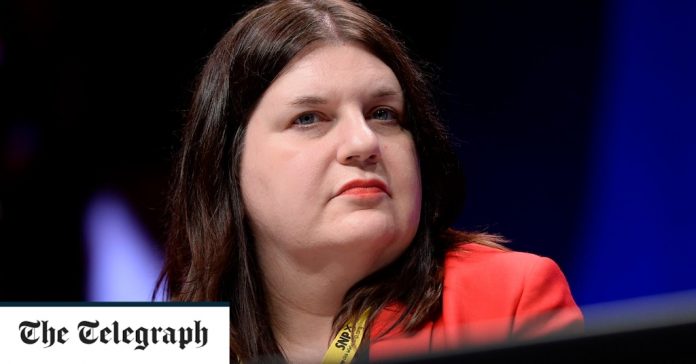 The SNP leader of Scotland’s largest local authority has been accused of “blatant” double standards after it emerged that she repeatedly used her official car to travel between her home and the Cop26 climate change summit.

The Telegraph can disclose that Susan Aitken made six journeys using her car between the Scottish Event Campus in Glasgow, where the international summit was hosted, and her home.

A Freedom of Information response from Glasgow City Council disclosed that she used her car to travel both to and from the summit on November 1 and 2, when world leaders gathered in the city to kickstart the talks.

She also used her car, driven by a council official, to travel from her home to the summit on October 31, the day it officially opened, and on November 8.

A line of limousines belonging to world leaders attending the conference was pictured outside the event, including a large motorcade that transported Joe Biden, the US president.

However, it is understood Ms Aitken lived near a train station in Glasgow’s south side and electric shuttle buses were laid on, enabling delegates to travel quickly between the city center and the conference.

She welcomed mayors from around the world to Glasgow during the event, arguing that “cities are the leaders in the race to net zero” and they could “raise” the ambitions of the governments around the negotiating table.

Ms Aitken, who does not drive, also announced that cars would be banned from the city center over the following five years as part of a £30 billion plan to make the city carbon neutral by 2030.

Glasgow City Council said that most of their travel to the event was by shuttle bus and any car used would be a low- or zero-emission hydrogen or electric vehicle. However, the disclosure is deeply embarrassing ahead of next month’s council elections.

Liam Kerr, the Scottish Tories’ shadow net-zero secretary, said: “Glasgow voters will be sickened by the hypocrisy on display by the SNP. They asked people to leave their cars at home during Cop26.

“People took trains, buses and complied with extensive traffic management. Now it transpires their council leader swanned about Glasgow in her limo throughout.”

Ms Aitken has previously faced criticism for using taxis for journeys that could be made on foot or by public transport, including to a climate change event at Glasgow Central station last October.

A city council spokesman said: “The leader of the council carried out more than 50 engagements across the city during Cop26 and regularly traveled to and from these on the electric conference shuttle buses.

“When traveling by car, low and zero-emission hydrogen or electric cars from the council fleet were used.”