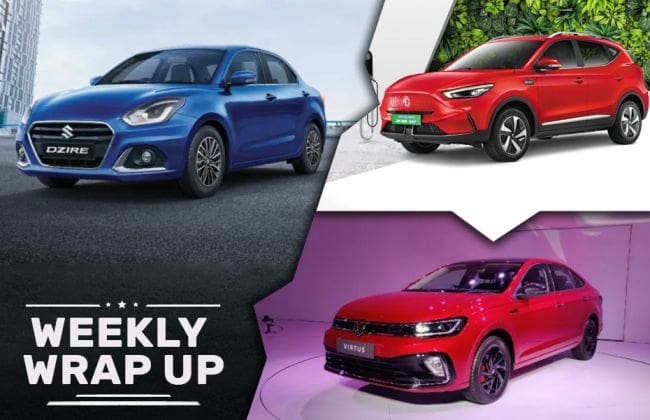 As many as four new launches, plus one crucial reveal. Gosh, what this week packed with action!

Over the past week, we saw not one… not two… not three, but four new launches, including the Maruti Dzire CNG and the facelifted MG ZS EV. Meanwhile, Toyota has been extensively teasing the soon-to-be-launched 2022 Glanza. So, Volkswagen took the wraps off the Virtus compact sedan.

Here’s a quick low down:

The Dzire is now available with an optional CNG kit, making it the third sedan in its segment to get the cleaner fuel option. The CNG can be had in two variants, priced from Rs 8.14 lakh (ex-showroom Delhi). Here’s a detailed spec comparison with its rivals.

MG has launched the updated ZS EV with new features, a slightly revised design, and mainly, a bigger battery. It offers more driving range and is even more powerful than the pre-facelift model.

Lexus has brought in the all-new NX350h, one of its most popular hybrid luxury SUVs. It has got a makeover — both on the outside and inside — along with new features and technology.

BMW has introduced the facelifted X4, available only in the ‘Black Shadow’ edition. The coupe-style SUV gets an updated exterior and interior but is powered by the same set of inline-six petrol and diesel engines.

Volkswagen has taken the wraps off the new Virtus sedan, which replaces the decade-old Vento. It will share its underpinnings with the Slavia and use the same 1-litre and 1.5-litre turbo-petrol engines.

Toyota has put out multiple teasers of the new Glanza ahead of its launch on March 15. The videos offer us a glimpse of its updated exterior and interior, some new features, and also fuel economy.

Volkswagen Polo To Get A Special Edition

The Volkswagen Polo will soon get a special edition, its last hurrah before it’s discontinued. That said, the special-edition model will probably be only about some visual differences both inside and out.