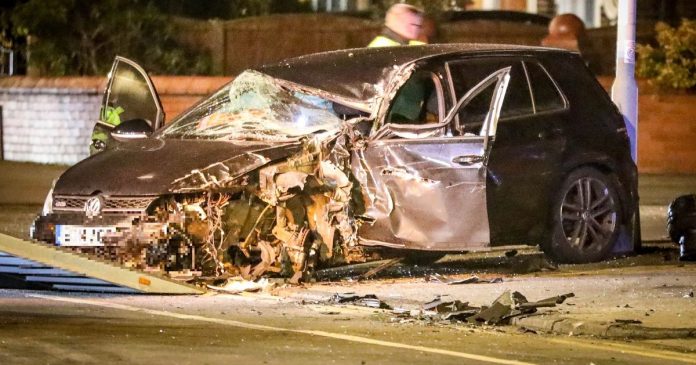 Two people were taken to hospital after a crash involving a car and a Greggs lorry in Stockport.

It happened on the A6 Wellington Road North in Heaton Chapel at around 10:30pm on Friday night.

A Volkswagen was involved in a collision with the HGV close to the McVities factory.

Emergency services raced to the scene.

Specialist medics were called from the Air Ambulance team were among those who responded.

A woman was cut from the car to eyewitness said
(Image: ASP)

At its height there were said to be six police cars, two police vans, two ambulances and two fire engines at the scene.

An eyewitness said a woman who was in the car was cut free by firefighters.

Two people were in the car were taken to hospital police have now confirmed.

However, their injuries are not life-threatening or life-changing a Greater Manchester Police (GMP) spokesperson said.

“Police were called around 10.30pm on Friday 25 February to Wellington Road North, Stockport to a report of a collision involving a car and a lorry,” they said.

“Emergency services attended and two people – the occupants of the car – were taken to hospital.

“Thankfully their injuries are not thought to be life-threatening nor changing.

Thankfully none of the injuries are life threatening
(Image: ASP)

“Inquiries are ongoing and no arrests have been made.

“Anyone with information should contact police on 101 or via our LiveChat at www.gmp.police.uk quoting incident 3170 of 25/02/22.

“Alternatively, details can be passed via the independent charity Crimestoppers on 0800 555 111.”

The road was closed for several hours near the McVities factory
(Image: ASP)

The mangled black Volkswagen could be seen inside the cordon whilst the lorry also had visible damage to its nearside.

Debris could be seen scattered across the carriageway.

The stretch of the road, close to the borders with Levenshulme and Burnage, was closed for several hours between the junctions with Roxton Road and Langdale Road whilst the police dealt with the aftermath and carried out enquiries.