Woman in car that plunged into Taranaki river 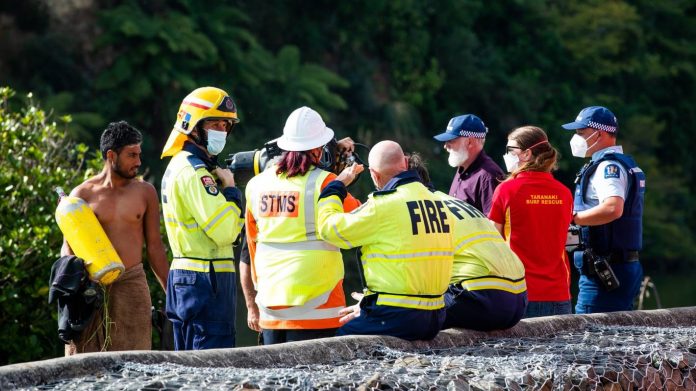 A woman is believed to have died after her car plunged into the Waitara River on Wednesday.

Emergency services were called to Waitara at 10.15am after the car left McLean St, near the bridge in the center of town, and entered the river.

The police Serious Crash Unit has been advised and officers and emergency services are working to recover the vehicle.

Crash witness Tora Barbarich-Love said he was driving over the bridge when he saw the vehicle in the river.

Emergency service personnel have been on the scene since the crash.

The Waitara surfer jumped out of his car, then ran and dived into the river to try and help free the woman inside.

“I was driving along the bridge and I saw it floating,” he said, standing in just a towel on the bridge.

Barbarich-Love said he would dive down, come back up for air, and dive back down attempting to help the woman.

Officers are conducting a scene examination.

The local farmer rushed to his home, just one minute away, and grabbed his dive gear.

Turner came back and dived in and was in the water for about 10 minutes, he said.

However, Turner could only get one door open, and the car was upside down, he said.

The bridge across the river has been closed off while the scene examination takes place.

Police have closed the road and bridge to vehicles and are examining the scene.

A car and ute remain at the West Quay and McLean St intersection, as part of the scene.

Due to the town bridge being closed, Waka Kotahi has temporarily removed a detour along State Highway 3 that was going through the town, bypassing road works along a stretch of the main highway.

Two other vehicles are inside the cordon and have minor damage from the crash.

As a result, SH3 between the intersections of Nelson St and Bayley St was now open to all north and south-bound traffic under stop/go traffic management with delays of up to 30 mins.

Motorists are asked to allow additional time for their journeys, follow the directions of traffic management staff and signs, and take care when driving through the area, the emailed statement said.

The detour through Waitara will be reinstated when possible.