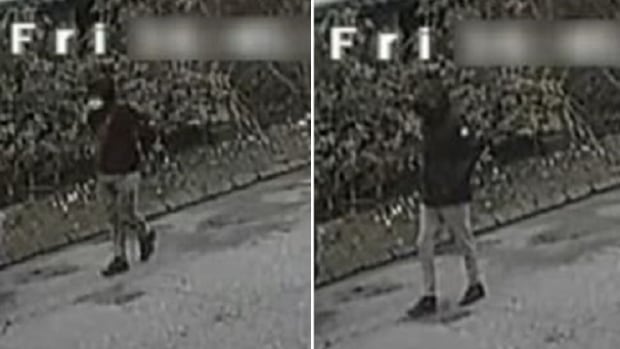 Two people were seen exiting a suspect vehicle not long after Milad Rahimi was gunned down in a North Vancouver grocery store parking lot the afternoon of Friday, March 11.

Video released by IHIT shows the two suspects walking away from the car after it was dumped.

It’s believed the car was set on fire Saturday, March 12 at around 7 pm

The driver is described as wearing a white medical mask and black hoodie and carrying a gray backpack with a single strap. The passenger was wearing a three-quarter length black jacket with a distinct white symbol on the left shoulder, gray pants and black shoes.

The victim of a shooting on March 12, 2022 in North Vancouver has been identified as 34-year-old Milad Rahimi. (Integrated Homicide Investigation Team)

Rahimi, 34, was shot multiple times outside the Real Canadian Superstore in North Vancouver, about five kilometers away from where the car was found.

Investigators said he was targeted, was known to police and had gang affiliations.

Police said after the homicide, the suspect car fled north on Seymour Boulevard and then turned westbound onto Mount Seymour Parkway.

Investigators are looking to speak with anyone who may have seen the two suspects.

Anyone with information or dashcam footage from either of the locations is asked to contact IHIT at 1-877-551-4448 or at ihitinfo@rcmp-grc.gc.ca.