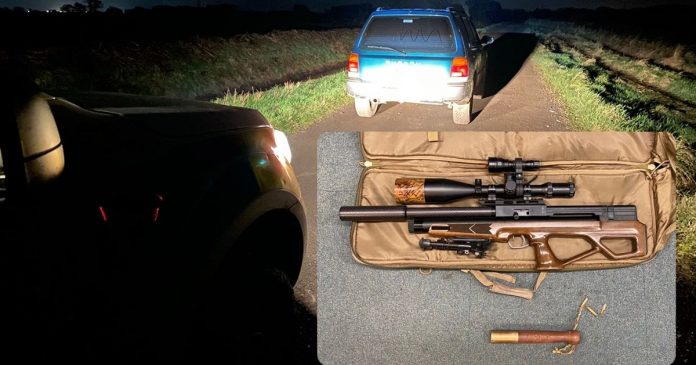 An investigation is under way after Humberside Police seized hunting equipment from a vehicle on Friday.

Officers were responding to reports of a vehicle shining a high powered lamp into fields around Crowle Moors in Scunthorpe and Swinefleet Common near Goole. Police used poaching legislation to stop and search a nearby Subaru Forester.

Items including a gun that could be used for hunting were found in the vehicle. The car and the items found within were seized and an investigation has been launched.

READ MORE: What we know so far about murder investigation launched in Withernsea

Under the Poaching Prevention Act 1862, a police officer may stop and search any person or vehicle on any highway, street or public place if there is reasonable cause to suspect poaching. Any game, article, dog or vehicle if used in offense may be seized and detained.

Humberside Police North Lincolnshire tweeted a picture of the seized vehicle and its contents on Saturday evening. The post read: “Police received reports of a vehicle shining a high powered lamp into fields around Crowle Moors and Swinefleet Common last night.

“This Subaru Forester was stopped nearby & searched under poaching legislation. The car and items within were seized and an investigation commenced.”

More from Goole:Deer savaged by dogs on East Yorkshire farm

Check out all the latest headlines from across Hull here

Get the latest breaking news in Hull and East Yorkshire by signing up for updates here.