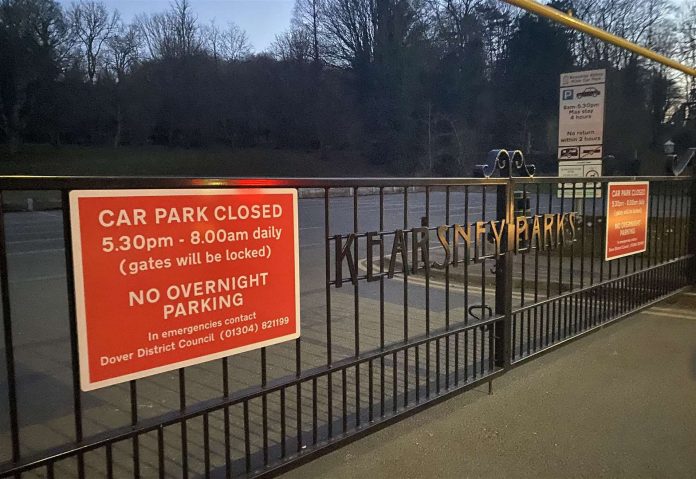 The opening hours of a popular parks main car park have now been extended – after drivers became trapped in the lot.

The out of hours team at Dover District Council had to release five cars from the car park at Kearsney Abbey, in Temple Ewell, Dover, last month.

Council officials dealing with drivers who had been locked in at the Kearsney Abbey car park, photographed on March 6. Picture: Jim Winter

This was when the gates to the car park were being closed between the hours of 5.30pm and 8am, due to anti-social behavior in the area overnight.

The council said it had experienced littering and nuisance driving.

Signs letting drivers know of the opening hours were fixed to the gate of the park, which includes woodland walks, play areas and a duck pond.

But this didn’t stop some drivers still getting trapped in the car park, and having to call the council’s emergency line to be released.

No fines were issued for this.

The opening hours of the car park have now been extended. Picture: Jim Winters

A spokesman for DDC said last week: “We can confirm that the main car park in Kearsney Abbey currently closes 5.30pm-8am.

“This is clearly stated on signage, with the contact number for anyone who may get locked in.

“This follows feedback from residents/partners on keeping the park looking great for the benefit of everyone, and community safety matters, including litter from overnight parking and nuisance driving.

“While the car park is closed, the park remains open for people to walk in/walk their dogs, etc.

“We continue to look into the car park times and the situation is regularly reviewed.

“We can confirm that a number of other car parks in the district are closed at night, and are clearly signed.

“We had five calls to the Out of Hours team in February from people who needed to be let out of the Kearsney Abbey car park. There was no charge/fine for this.”

But on Monday, the authority confirmed it has now changed the opening times due to the lighter evenings.

The spokesman added: “Please note, the car park opening times at Kearsney Abbey have changed today (Monday) to 7am-7pm, as the evenings get longer.”