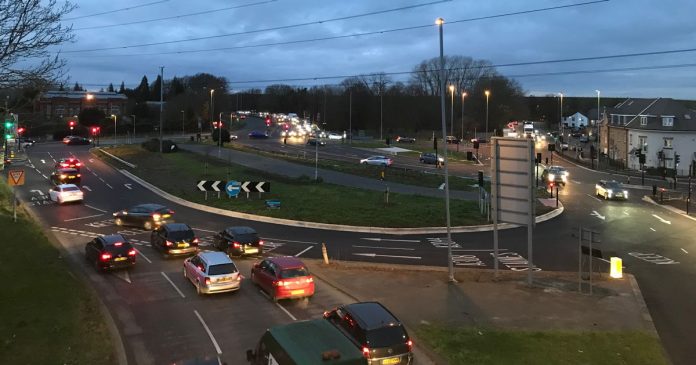 The redesign of a busy Surrey Roundabout has continued to draw concerns from residents – with footage by police showing a near-miss between a car and a lorry. It was filmed at the busy Crooked Billet roundabout, which connects Heathrow Airport/Windsor, Central London, Staines, Kingston and Colnbrook, with the A30, A308 and A3044 leading off.

The footage, from March 17, was posted by Surrey Police’s Roads Policing Unit (RPU). The force explained: “This lorry driver failed to look properly and see a car when changing lanes, thankfully the car driver noticed and narrowly avoided a collision – HGV driver reported for due care.”

Many who replied on social media also blamed the car or the roundabout design itself for the incident. The Crooked Billet recently underwent £6.4 million construction work which included realigning of carriageway markings, traffic signal upgrades and new street lighting/drainage.

Residents have continued to express concerns about the roundabout, including Neil Martin, a driving instructor who lives just to the side of the Crooked Billet. He told Surrey Live that most of his pupils are petrified of it.

He says: “Before the works went on, the main issue with The Crooked Billet is the lack of signage. It was good news when they were going to do the works, don’t get me wrong, it is a major artery in and around Heathrow Airport. I just don’t think the £6.4 million that was spent on it was spent wisely, I actually think the roundabout worked better before they spent all this money on it.

“The biggest issue with what they’ve done at the roundabout is all they’ve really cared about is from the M25 to the Crooked Billet Roundabout. If you look at the signage that they’ve put along there, telling people what lane they ‘ve got to be in, trying to make it easier there, and then you look at every other approach, so when you come out of stains, there’s not a single sign there telling you what lane to be in, what lane you need to be on the roundabout.

“Same from the A308 from Fordbridge Roundabout, they haven’t put any new signage up there. It’s still the old roundabout sign.”

SurreyLive recently visited the roundabout at rush hour to see what it was like, finding it pedestrian-friendly, but with some areas of potential traffic friction. But for Sir Edward Fenn, who lives just next to The Crooked Billet, there are issues even when approaching it on foot.

He says: “As a pedestrian, there’s obstacles that you’re met with, when you walk down to the old Crooked Billet area of ​​the pub, which is now flats, you go across the road and you get vehicles pulling up because they want to drive onto the path and park on the path and cycle area.When you cross from the large island going down towards Staines, you come to a crossing point and the vehicle protection barrier is behind you, so you’re standing in front of the barrier to cross.

“I find that the Crooked Billet Roundabout is lethal, it’s waiting for something to happen where we should be protecting it now. If you’re a road user, if you’re coming from the reservoirs, you’ve got a left hand lane turn only, a straight on turn only, you’ve got a right turn lane only, and if you’re in the right turn lane only, as you go over it, it goes into a straight line.”

Roundabout is used by over 20,000 vehicles a day

“Over 20,000 vehicles use the junction every day at peak times. Our improvements will increase traffic capacity and cut the risk of accidents, which will improve people’s journeys and boost the economy.”

Sign up to our daily newsletter to get more news from SurreyLive straight to your inbox. Find out how here.