Home Latest Driver of stolen car found with fake gun after it flips in...
Latest 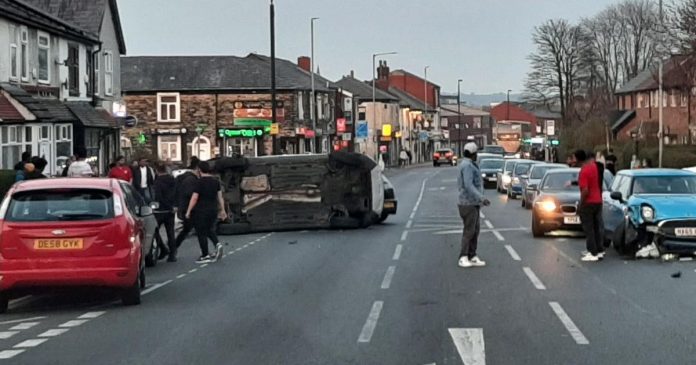 The driver of a stolen car was found with a fake gun after a police chase ended in a smash in Bolton.

The car then smashed into another vehicle on Deane Road as it tried to get away. Video footage from the scene showed a vehicle flipped completely onto its side in the road.

READ MORE: Tragedy as woman hit by her own car dies

The driver – a 30-year-old man – was detained at the scene as locals watched. Police found him with an imitation firearm.

The car was found to be stolen from the Merseyside area in January. The man was arrested on suspicion of theft of a motor vehicle, handling stolen goods, carrying a firearm in a public place and dangerous driving.

A car was left flipped onto its side after a police chase
(Image: Naz Ahmed)

He remains in police custody. In a statement, a Greater Manchester Police spokesperson said: “Shortly before 6.25pm, officers covertly followed a suspicious vehicle on suspected clones plates on Deane Road, Bolton. A short pursuit ensued and as the vehicle attempted to get away it collided with another car .

“The driver was detained and, following enquiries, a suspected imitation firearm was recovered and the car was found to be stolen from Merseyside in January.

“A 30-year-old man was arrested on suspicion of theft of a motor vehicle, handling stolen goods, carrying a firearm in a public place and dangerous driving. He remains in custody”.