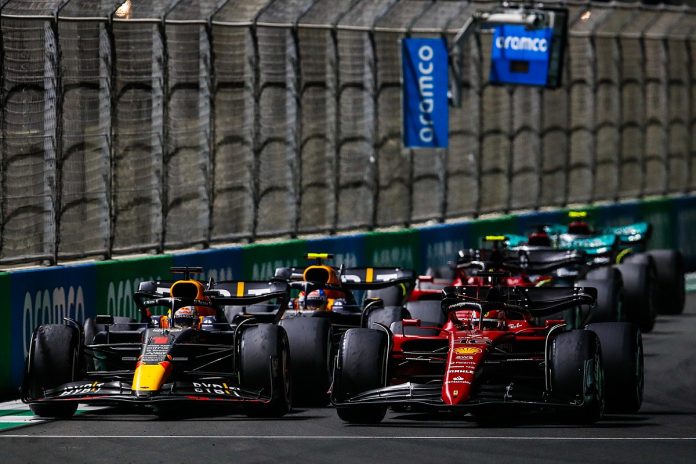 In both Bahrain and Jeddah, Verstappen drew alongside Leclerc as they approached the final corners before the restart once the safety car had moved ahead to return to the pits.

These moves have been repeats of the similarly forceful tactic the Red Bull driver used against Mercedes’ Lewis Hamilton just before the final lap of the 2021 Abu Dhabi Grand Prix.

There, Verstappen briefly edged ahead of the then race leader as they accelerated and braked through the Yas Marina track’s final turns, which Mercedes highlighted in its bid to have that controversial race’s ending amended.

In Bahrain in 2022, the tactic backfired on Verstappen as he was pinched on the inside line for the last two corners, which meant Leclerc could race clear and the following Carlos Sainz Jr was able to close in on the Dutchman before his car’s superior top speed meant he eased out of danger.

In Jeddah, Verstappen drew alongside on the outside line, with race leader Leclerc again setting the pace and line once the safety car had started its return to the pits, running his rival very wide in a successful bid to maintain his advantage.

Ahead of qualifying for this weekend’s Australian Grand Prix, the race director on this occasion, Niels Wittich, issued updated event notes that highlighted Article 55.14 of F1’s sporting rules, to reinforce its meaning to the drivers and teams and therefore clampdown on such moves.

The update states: “In order to avoid the likelihood of accidents before the safety car returns to the pits, from the point at which the lights on the car are turned out, drivers must proceed at a pace which involves no erratic acceleration or braking nor any maneuver which is likely to endanger other drivers or impede the restart.”

Autosport sources have indicated that the clampdown is also related to various maneuvers drivers have been employing at safety car restarts as well as what Verstappen has been doing in the last three F1 races, but that his tactic is simply a high-profile example of what the FIA no longer wants to occur.

The governing body is keen drivers keep a constant speed when running in order behind the leader once the safety car has been withdrawn – until the leader returns to racing speed for good – to avoid a repeat of the enormous accident that marred the 2020 Tuscan GP at Mugello.

There, cars accelerating and braking erratically further down the pack meant big gaps formed between the cars, even as then race leader Valtteri Bottas stayed at a constant speed up front, with the end result being drivers accelerating into space behind the slow-moving leaders and then sudden braking caught out following rivals and triggered a multi-car pile-up on the start/finish straight.

It has been suggested that the new guidance on restarts means cars will have to take the return to green flag racing in single file, but it is understood that they will still be allowed to move side-to-side and briefly alongside other cars before the safety car is being withdrawn, in order to warm their tires ahead of racing resuming.

Even at the restart, drivers can still be running on a line either side of a rival ahead, but all parts of their car must be fully behind at all times until the race fully resumes.

Verstappen’s tactics against Ferrari had not gone unnoticed at the Scuderia, with Sainz revealing in Melbourne that his team had been looking at what Verstappen and others were doing in restarts in a bid to take a possible advantage – as so nearly happened in Bahrain.

When asked about Verstappen’s restart moves by Autosport, Sainz explained that such tactics were “a bit different”, although he stressed that he personally felt they were “not an issue”.

“For sure this is a very driver specific preparation that we go through in every race and we start to understand what other drivers do at the restarts,” Sainz added. “We studied and we see there’s an opportunity.

“We look at everyone – not only Max, let’s say. Obviously Max and Checo [Sergio Perez]we look at them more closely this year because we see that we are more in the fight.