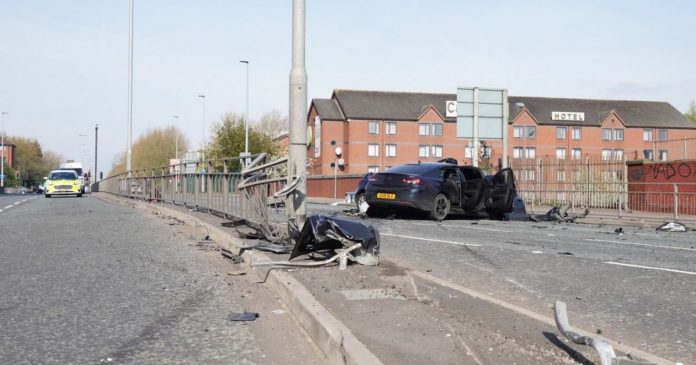 A major road in Salford was shut for hours today following a two-car crash which left four people in hospital.

Emergency services were called to the smash involving two cars in Regent Road at about 8am today. Firefighters rescued two people who were trapped inside one of the vehicles.

The road was taped off between Ordsall Lane and Trinty Way following the crash. Pictures from the scene show two badly damaged vehicles inside the cordoned off area.

Four people have been taken to hospital, police say. GMP say no arrests have been made.

A spokesman said: At around 8.05am we were called to a report of a collision involving two cars on Regent Road, Salford. Four people were taken to hospital for treatment – the most serious being a man with serious leg injuries. No arrests have been made.

“Officers from our Roads Policing Unit are investigating and anyone who witnessed the collision or may have dash-cam footage is asked to contact us via our LiveChat facility online, if able, or by calling 101 quoting incident number 823 of 16/04/2022 .”

A spokesperson for Greater Manchester Fire and Rescue Service (GMFRS) said: “At around 8am this morning (Saturday 16 April) we were called to reports of a road traffic collision involving two cars on Regent Road, Salford.

“Two fire engines from Salford and the Technical Response Unit from Leigh were mobilized to the incident, where firefighters used cutting gear and other specialist equipment to rescue two people from a vehicle and convey them into the care of colleagues from North West Ambulance Service. Two other people had self-rescued prior to crews’ arrival.

“Firefighters made the area safe before departing after around an hour and a half at the scene.” The road reopened just after 6.30pm.