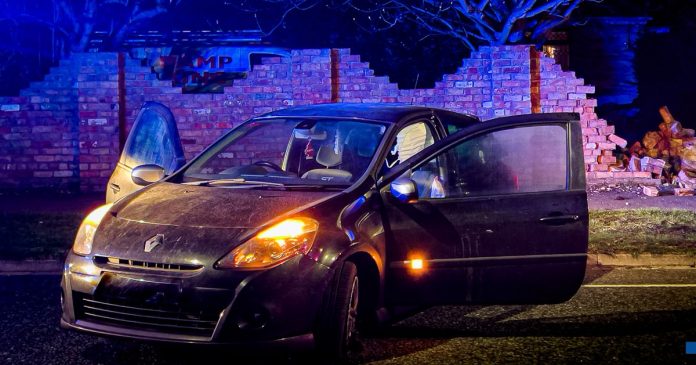 Two women had a ‘lucky escape’ after the car they were traveling in collided with a wall in Cleethorpes. The crash caused extensive damage to the car and the wall.

The two occupants of the vehicle were in a Renault Clio and thought to be driving at excessive speed when the wet surface caused them to skid off the road and in to the nearby wall. Thankfully, they only suffered minor injuries and the driver was recommended to be put on a driver improvement course.

After hitting a solid concrete post and then colliding with the wall, officers at Humberside Police said the pair were very lucky to be left with only minor injuries. One officer commented on how well the Clio has dealt with the impact saying: “I’ll give it it’s due. It protected two lives very well. Hitting a solid concrete post and the wall and both persons got out without any major injury.”

Speaking about the incident, Humberside Police said: “A lucky escape for the two females in this little Clio. Excessive speed and a damp surface caused the car to spin and crash into a residents wall. Fortunately only minor injuries and driver has been put forward for a driver improvement course.”