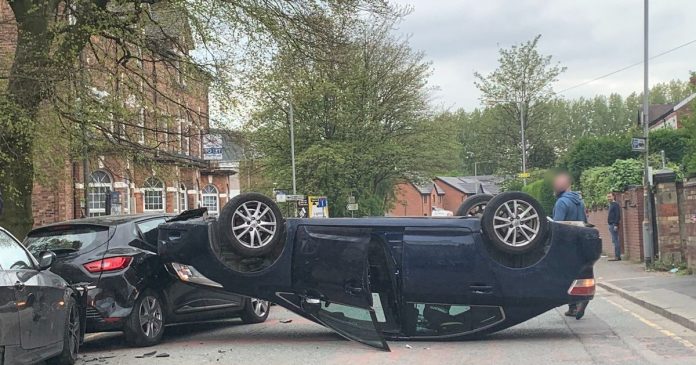 Pictures show the moment a car completely flipped onto its roof in the middle of a quiet Prestwich street on Thursday evening (April 28). The three car smash happened shortly before 5.30pm, on George Street.

Onlookers watched on as paramedics attended the scene, as well as fire crews from the Greater Manchester Fire and Rescue Service. There were no major injuries, with the driver managing the upside-down vehicle to get out of the vehicle before emergency crews arrived.

The smash happened on George Street, beside the junction with Bury New Road. More details about the nature of the incident are not yet known.

One fire engine attended the scene, with Hatzola paramedics also responding to check over those involved. Crews remained at the scene until around 6.15pm, when the car was then removed.

It comes after another car, an Audi, which was pictured after flipping onto its roof near the Old Trafford football ground earlier on Thursday evening. Crews rushed to the scene but there were also no reported injuries.

“The collision involved three vehicles and one casualty had self-extracted prior to crews’ arrival. Firefighters made the scene safe and the casualty and was checked over by Hatzola paramedics. Crews were in attendance for approximately forty-five minutes.” Greater Manchester Police have been approached for further details.