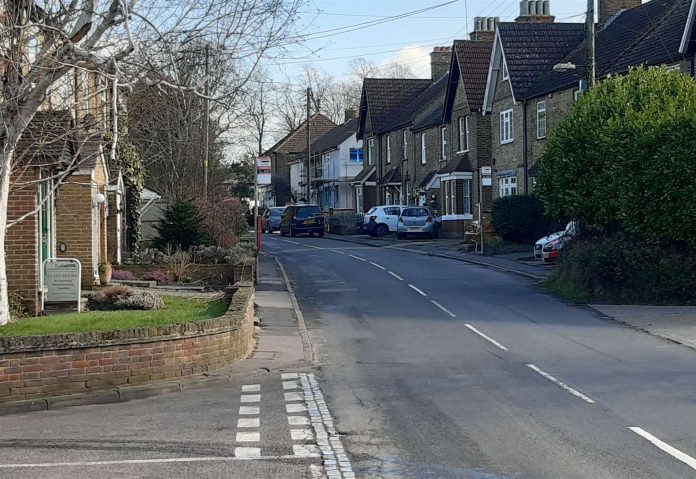 A Swanley businessman who fled police lost control of his powerful vehicle and had to choose between hitting a mum and her two children – or a wall.

Michael Fadoju smashed into the wall causing £3,000 worth of damage – after a mother and daughter jumped out of the way.

The crash happened on Crockenhill Road in Swanley (55123371)

Now the 30-year-old, of Leechcroft Avenue, Swanley has also avoided an immediate jail sentence because he has waited a year to get to court.

Prosecutor Ian Foinette told Maidstone Crown court how police were trying to arrest him in January last year when he tricked them- and managed to get into his car and left at speed, forcing the officer to stand behind a telegraph pole for protection.

During the chase involving four police cars, Fadoju overtook a car on the wrong side of the road before speeding along Crockenhill Road at 70 mph – and police officers backed off fearing a serious accident.

The prosecutor said that on another occasion Fadoju was “aggressive and bullying” and shunted a vehicle leaving the driver and his wife and their child suffering neck and knee pains.

“As he overtook another vehicle, he clipped a traffic island, lost control, went across a grass verge before ending up demolishing part of a wall.

“A mother was there with her two children, aged five and eight-years-old, and had to take action to avoid being hit by the car.”

Mr Foinette said the mother later told the police of her fear after “grabbing the children” and moving out of the way.

Fadoju, who has a previous conviction for dangerous driving, then fled his wrecked car but was brought down by police using a tazer, the court heard.

At the time the businessman claimed he was suffering from PTSD following a serious assault in Margate in 2020.

But the court heard that as he had spent the past 54 weeks on a curfew it would have counted against any jail sentence – and the maximum for dangerous driving is two years.

Judge Smith gave him a 15 month jail sentence suspended for two years, ordered him to do 200 hours of unpaid work.

Fadoju was also banned from driving for three years and ordered to pay £500 court costs. Two charges of assaulting the police officers were later dropped by the CPS.

Judge Julian Smith told him: “The consequences could have been so much worse. As a result of your extraordinary driving you faced a choice one no one should have to make: to either kill or seriously injure a mother and her two young children or to steer away from them and through a wall, destroying it, and running the risk you might damage whatever was the other side of it..and to yourself.

“That was what you left yourself as you took that left-hand bend. Where would you be if you had hit the mum and children? Any sentence would have been nothing compared to the sentence on that family.

“You must have thought you were in a film or that this was some consequence-free act.