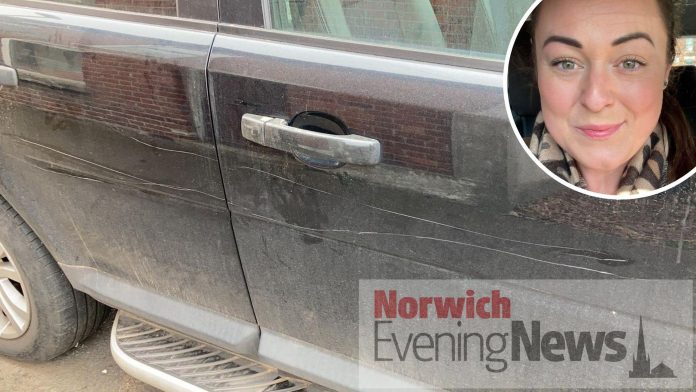 Vandals have targeted numerous cars in NR3 apparently scratching paintwork with a key.

At the weekend the yobs attacked numerous vehicles in the city causing an estimated thousands of pounds of damage.

The attacks come a few months after a similar incident in Beaconsfield Road.

Lauren Daniels, who lives in Southalls Way, noticed her partner’s car had been vandalized on Sunday.
– Credit: Lauren Daniels

Lauren Daniels, who lives in Southalls Way with her partner Alex Gardiner, noticed her partner’s car had been vandalized on Sunday.

She said: “My partner has recently had an operation so he can’t go out – so I went out to go do some shopping.

“That’s when I noticed a mark on the back of his car and had to do a double take.”

Upon closer inspection, the 25-year-old saw two deep marks on the bumper of Alex’s Audi.

Lauren added: “My partner got quite upset because he’s worked hard to pay for the car – it was a lot of money.

“People just go out to damage someone else’s property and there doesn’t even seem to be any consequences for their actions.

“It’s just an added expense for us to try and fix.”

Julie Brociek-Coulton (Lab), councilor for the ward, said: “It’s awful that our residents have to live with people damaging their property.

“I would ask that they report it to the police on the email address that was created several years ago – which is NorwichNorthLPC@norfolk.pnn.police.uk – so that it goes straight to our Norwich North policing crew.”

Sara Brighten, who lives in St Pauls Square, has had her car keyed on three separate occasions.
– Credit: Sara Brighten

Sara Brighten, who lives in St Pauls Square, has also been a victim of the car-keying spree on multiple occasions.

She said: “This is all too frequent around here and never in the 17 years of living in NR3, I have ever heard of so many people getting their cars scratched.”

Sara’s car has been attacked on three separate occasions and her partner’s car was also targeted in the latest incident, on Sunday.

Sara added: “Me and my partner’s car go keyed at the weekend – I’m just really disappointed in humanity.

“It’s very disheartening hearing of all this vandalism and then seeing it at my own property as well.”