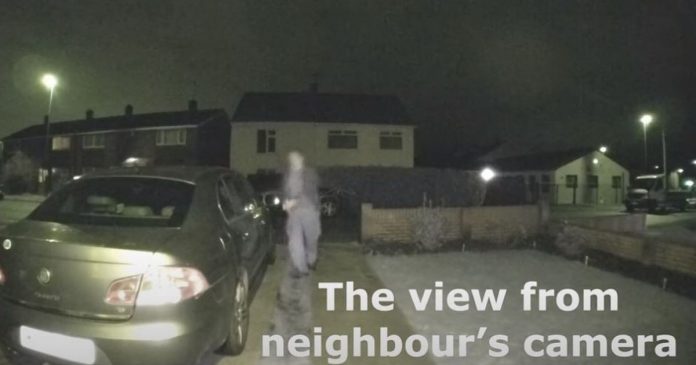 Residents in one part of east Bristol have come together to produce a video of clips showing men allegedly testing the doors of vehicles in their streets.

Avon and Somerset police have confirmed there have been 11 reports from residents of Staple Hill and Soundwell of residents having searched their cars, items stolen or someone trying the door handles of vehicles parked up at night.

The reports have increased after residents shared warnings on neighborhood internet forums and people with doorbell cameras or CCTV checked them and discovered recordings of people doing this.

In Gorse Hill, a street in Soundwell, some residents came together to compile a video from various doorbell cameras showing the men involved earlier this week. They posted a five-minute video on YouTube.

A spokesperson for Avon and Somerset police said they were investigating and were urging more people to report every incident they could, to build up a bigger picture of those responsible.

A still image from a video posted on YouTube from the residents of a street in Soundwell, showing people allegedly testing car doors

One resident of Gorse Hill said residents were fed up with what was happening. “It looks like this crime is happening everywhere,” said the resident, who declined to be named.

He added: “More and more people are complaining about this – some of them are reporting that their front doors are tried. We put this video together – we did report it to the police.”

Avon and Somerset’s neighborhood officer, Sgt Andrew MacMillan said his officers were taking the reports seriously, and while 11 had been reported in the past four weeks, he was urging more people to come forward with reports if they had them.

Police have circulated a Neighborhood Watch alert and inquiries are underway, Sgt MacMillan said. He said: “Tackling vehicle crime is a priority for us. We understand the impact it has on people, especially if their vehicle is also damaged by an opportunist thief.

“We really want people to report incidents to us either by calling 101 or through the online form on www.avonandsomerset.police.uk. If you see someone tampering with a vehicle and they’re still in the area please call 999 straight away.

“These reports all help us target our patrols and bid for specialist resources so we can catch those responsible. If you have any information about the theft in Gorse Hill please call 101 and give the reference 5222057558.”

If you have any other information about vehicle crime in the area get in touch with the neighborhood team on the same number, or call the independent charity Crimestoppers 100 per cent anonymously on 0800 555 111.

Want our best stories with fewer ads and alerts when the biggest news stories drop? Download our app on iPhone or Android