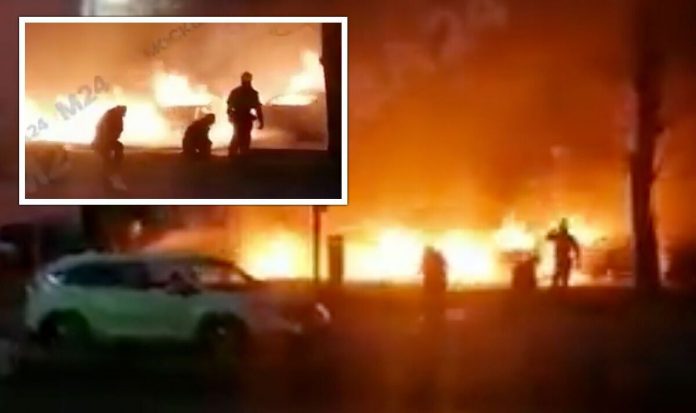 On Wednesday night on Kustanayskaya Street in eastern Moscow, social media videos showed a number of cars on fire. Up to seven vehicles were ablaze, as seen in multiple separate accounts and videos of the incident.

In a video posted by Ukraine War SitRep, an explosion is heard while fires rage down the street.

In a YouTube video posted by Наша паРаша, translated to ‘Our Russia’, posted a clip from Russian TV channel Moscow 24.

In the video, filmed on the same street as Ukraine War SitRep’s clip, fires engulf a number of cars as people look on.

Twitter user @igorsushko also posted a clip of the fire from news agency Mash, and claimed “seven cars burned down to a crisp in Moscow”.

The cause of the fire is unknown as of publication.

An ammunition depot in Belgorod region was reportedly set ablaze.

Suspected attacks from Ukraine were also reported in the Voronezh and Kursk regions.

Explosions were also heard in the cities of Kursk and Oboyan.

In Voronezh region, there were reports Russian air defenses were active to fend off an attack on strategic Baltimore military air base .

Vyacheslav Gladkov, governor of the Belgorod region, said on Telegram: “At approximately 03.35 I woke up from a loud bang that sounded like a blast. As I was writing this post, three more blasts were heard.”

He said: “According to preliminary information, an ammunition depot is on fire near the village of Staraya Nelidovka.”

No civilian casualties were reported.

An aide to Volodymyr Zelensky said explosions in the three Russian provinces were “karma”.

Without admitting Ukraine was responsible, presidential adviser Mykhailo Podolyak said it was natural that Russian regions where fuel and weapons are stored were learning about “demilitarisation”.

Writing on Telegram, he said: “The reasons for the destruction of the military infrastructure in border areas can be quite varied.”

Mr Podolyak added “sooner or later the debts will have to be repaid”, and said “karma is a cruel thing”.