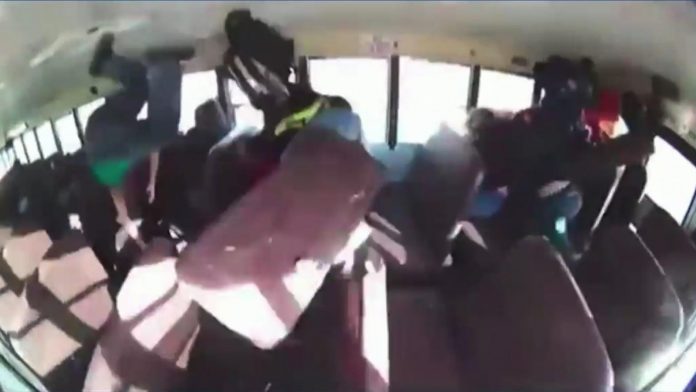 Shocking video released by US police captures the moment pupils get flung across their school bus, as it is hit by a car officer believe was racing another at up to 110mph.

A white car races straight at them.

All the children can then be seen being flung in the air and thrown across the bus as it gets knocked over on its side.

According to ABC local media, the horrifying moment happened on February 23 in southwest Albuquerque at about 4pm as the children traveled home.

Police on Wednesday released the footage to try to help their investigation into exactly what happened.

The bus driver reportedly told police he was on his normal route when the vehicle was suddenly struck at a junction.

There were 23 children on board at the time of the crash. Seven were taken to the hospital, Albuquerque local TV reported. Two of them were severely injured.

In the video, police officers and bystanders can be heard attempting to comfort the students, including one with a broken leg.

Passers-by nearby ran to help.

A statement from Albuquerque police said: “Through the on-scene investigation it was learned that a white Ford Mustang was racing a blue Ford Mustang.

A man has been charged with two counts of “great bodily harm with a vehicle”.