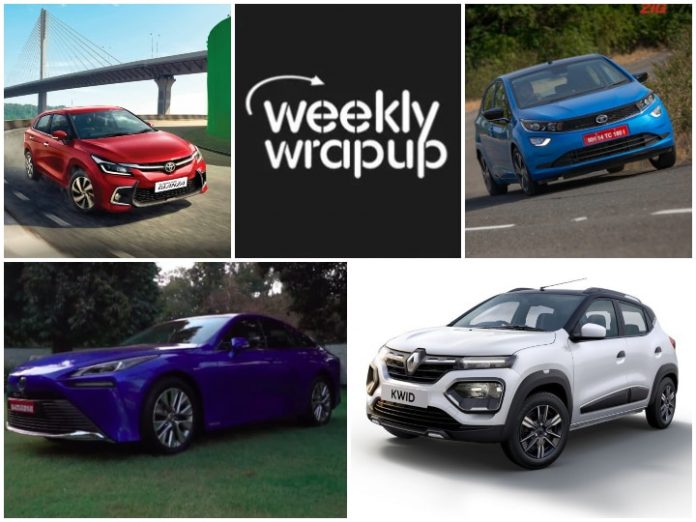 The past week had comparatively fewer launches than the fortnight before it, but they were important launches nonetheless. In addition, multiple carmakers in India and abroad unveiled their vision of future electric cars with new concepts.

Here’s the full briefing of all the important car stories from last week that you may have missed:

We already knew what to expect from the new shinea after the 2022 Maruti Balenos launch. But we were still impressed with how much Toyota’s designers changed in the new Glanza to give it a unique identity. the Glanza and Baleno’s differences are largely aesthetic, and it still gets all the important features and updates that were introduced in the Maruti, such as six airbags, a head-up display, and a 360-degree parking camera.

Renault has given its entry-level hatchback, the Kwid, a variant rejig and new cosmetic updates. It now gets dual-tone 14-inch wheels and white interior trim bits that liven up the cabin. The 800cc and 1-litre petrol engines continue unchanged, and you can find out all about the new updates and prices in our Kwid launch story.

Mahindra has three future electric SUVs in the pipeline, and we’ll get to see them in concept form in July. For now, the carmaker has given us a glimpse of what to expect from their interiors. You can take a look at the upcoming Mahindra EV’s dashboard here, but we’ll have to wait a few years until the first of the concepts materializes into a production model.

The Ministry of Road Transport and Highways has given the nod for a new study that’ll investigate the Feasibility of hydrogen fuel cell EVs in India. The Toyota Mirai will be the testbed for the study that, if successful, could boost hydrogen-powered vehicles in the country. Several Indian states have accommodated fuel cells in their EV policies, but without any H2-powered models currently on sale in the country, the technology is still nascent.

Jeep’s new seven seater Meridian SUV will break cover on March 29 as a rival to the Skoda Kodiaq other Toyota Fortuner. It’s based on the compass platform, but it could get a different set of engines than the five-seater jeep SUV. We might even see some active safety tech and ADAS features in the upcoming SUV.

The Tata Altroz ​​will finally get a new automatic gearbox option – an all-new dual-clutch gearbox, no less! It’ll be paired with the 1.2-litre NA petrol engine at launch, and will be available alongside the standard 5-speed manual transmission. The Altroz ​​DCT will be launched in the coming week on March 21.

The following stories give you key updates on the electrification movement in other countries: