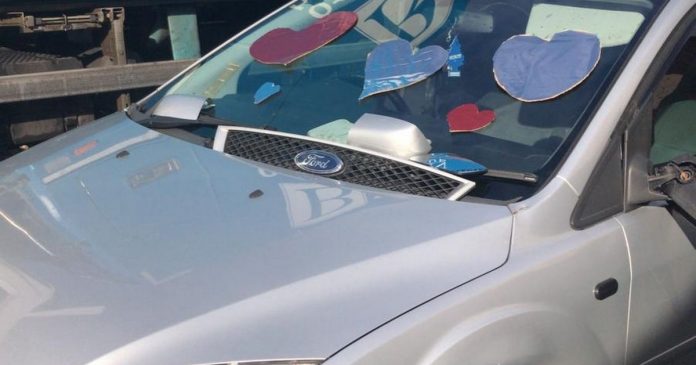 A long-abandoned car was finally removed from a disabled bay in Callander this week after a saga described as “a complete farce”.

Fed-up Callander residents have gone as far as decorating the vehicle with love hearts for Valentine’s Day and decking it in fairy lights for Christmas in order to draw attention to their plight.

But the car, dumped in the parking spot outside the town’s Post Office since September last year, has now been towed away.

Residents had called for months for the vehicle to be removed over fears it was causing safety issues for disabled motorists.

The car is believed to have been left in the spot on Station Road since September 20, 2021.

Desperate locals appealed to Stirling Council and Police Scotland to remove the neglected motor but both claimed that they did not possess the relevant powers required to remove the car.

The road tax for the vehicle ran out at the start of the month, and police and the council are believed to have pushed for the DVLA to get involved, with Trossachs and Teith Tory councilor Martin Earl also liaising with the DVLA.

Councilor Earl said yesterday (Thursday): “Good riddance to it – and now people can access the parking right outside the Post Office.

“That it has taken six months to do so is a complete farce.

“The law and responsibilities involving situations like this have to be changed and simplified.

“Blocking a disabled bay should be good enough reason to get any vehicle doing so moved very quickly.”