Home Latest 'It took just 10 minutes and someone's car was gone' - I...
Latest 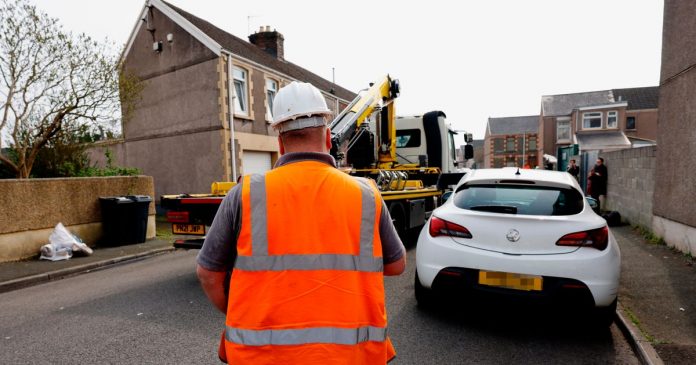 Standing on the road side in a small street, I encountered a very tense 10 minutes as an enforcement officer tows away an untaxed vehicle without the owner in sight. Equipped with automatic number plate recognition technology, and some big orange clamps these enforcement officers don’t muck around if you don’t pay up.

If someone doesn’t pay their car tax they will be sent two letters by the Driver and Vehicle Licensing Agency. If they still don’t pay they will find themselves on the clamping list.

This is what happened here in Port Talbot, the previous day an enforcement officer had gone out in a DVLA van to clamp this vehicle and had given the owner 24 hours to pay their tax and a release fee. Unfortunately they didn’t, so they retuned to collect the vehicle.

Read more:The part of Swansea where cars keep being vandalised

Despite it being illegal to drive on the road with an untaxed vehicle, some motorists are still taking the risk, in 2021 there were 42,379 enforcement actions (including fines, penalties and clamping) across Cardiff and Swansea.

The DVLA doesn’t always need to spot an untaxed vehicle on the road to take action, but any vehicle seen on the streets that isn’t taxed, or is wrongly declared SORN (Statutory Off Road Notification – meaning the vehicle should not used on a public road) risks being clamped or impounded.

DVLA’s enforcement teams and wheelclamping partners travel around the UK as part of their day-to-day activity taking action against untaxed vehicles.

When we arrived at the vehicles address in Port Talbot, there was no messing around. The enforcement officer was quick to unclamp the car, attach it to a crane, lift the car up and secure it and drive off. An operation which was sleek and was done and dusted in just under 10 minutes.

How much does it cost you if you don’t pay your tax like this car owner?

If the release fee is not paid within 24 hours, the DVLA impounds the vehicle and the fee rises to £200. There is also a storage charge of £21 per day. Again, a surety fee of £160 must be paid if the motorist cannot show that the vehicle has been taxed. The vehicle was then transported to DVLA’s pound in Port Talbot where they impound the vehicle and it will remain on site until the owner declares the vehicle, but leaving your vehicle there comes with a hefty price. A bit more than a standard car park, the fee rises to £200 and there is also a storage charge of £21 per day.

Paul Davies, National Wheelclamping and ANPR Manager was also on site at the enforcement, said there’s no real excuse to not tax your vehicle.

He says: “It’s a legal requirement that people tax their vehicle. We know from the 44 million records that we keep at the DVLA when vehicle taxes’ run out. We send reminders out to these individuals, our online services are open 24 hours a day and we got the option to pay by direct debit and we offer a renew for the customer as well so there’s no real excuse why people shouldn’t be taxing their vehicle.”

When the DVLA clamps an untaxed vehicle the motorist is charged a £100 release fee
(Image: John Myers)

Paul adds not everyone purposely fails to tax their vehicle, but some do go to lengths to avoid paying it. He recalls that he has seen one incident where a driver tried hiding their vehicle behind a bush.

“The majority of people have busy lives and are forgetful, this is why we keep reminding people to use our online services,” he says. “Some people think they won’t get caught and think they’ll be the lucky ones, but as we’ve seen today we do find the vehicles on the quieter streets and deal with them and bring them into the pound.

“We get a range of emotions when collecting the cars, some people are embarrassed and apologetic that they’ve forgotten to tax their vehicle. However, you do get the ones who are angry they have got caught and they can get quite aggressive but our Enforcement officers are trained to manage those situations and if it gets too dangerous, they are told to drive away.”

DVLA has launched a new advertising campaign in the highest evading areas across the UK reminding motorists of the real risk of failing to tax their vehicles on time
(Image: John Myers)

How do you pay your car tax?

To avoid having your car clamped you can pay over the phone, online or direct debit at www.gov.uk/vehicle-tax.