PSNI officer clung to bonnet as car drove off at speed, court told 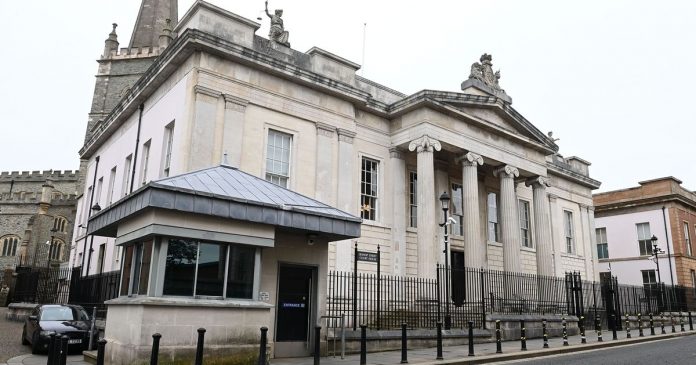 A car went “went faster and faster” as a police officer clung to the bonnet, a court heard.

The claim was made as a 28-year-old man appeared before a judge, facing a series of charges stemming from an incident in Derry last Monday.

The suspect was described as a danger to the public when he appeared at the Magistrate’s Court in Derry on Friday.

Adam McMonagle of no fixed abode was refused bail and remanded in custody by District Judge Barney McElholm.

The judge said: “To drive off at speed with someone clinging to the car bonnet and making no effort to stop, clearly puts that person’s life in danger and shows a reckless disregard for members of the public.”

A charge of attempted murder was withdrawn. The offenses are alleged to have occurred at the Skeoge Link Road in Derry last Monday morning.

Objecting to bail a police officer told the court that last Monday officers on mobile patrol in the Skeoge area saw an Audi car being driven at speed along a dual carriageway. The car stopped alongside another car and the defendant had a confrontation with the other motorist.

As the police approached him the defendant got back into his car and revved the engine. One officer smashed the windscreen in an attempt to stop the car from being driven off.

“The officer in front of the car, to avoid being run over, took evasive action and jumped on to the bonnet. He clung on as the car was driven at speed and was carried on the bonnet for about thirty metres. As the car went faster and faster the officer let go of the bonnet. He fell onto the carriageway injuring his hip and sustaining abrasions to his right hand and right elbow,” the police witness said.

The car was later found abandoned in the Shantallow area of ​​the city on the same afternoon. Checks carried out by the police showed the defendant was the registered owner of the vehicle and he was arrested when he arrived at Strand Road Police Station the following day.

“He was interviewed three times and largely gave no comment on interviews except top say he had a psychotic episode and remembered nothing”, the officer added.

Refusing bail Mr McElholm said “if that is true, if he suffered from a psychotic episode to the extent he carries on like this and then forgets about it, it is not safe for him to be roaming the streets”.

The defendant was remanded in custody until May 26.

To get the latest breaking news straight to your inbox, sign up to our free newsletter.